Adri Constantino shares observations of the nesting behavior of the rare and elusive Ashy Ground Thrush that caused a stir among the WBCP members.

The Ashy Ground Thrush, Zoothera cinerea is an uncommon medium-sized passerine that is found only in northern and central Luzon and on the island of Mindoro, Philippines. The Philippine field guide describes it as a “shy and hard to see” bird recorded in 300 meters lowland forest up to mid-elevation montane forests of 1500 m. There is very little known information for this Philippine endemic as it has been reported to the Wild Bird Club of the Philippines’ Bird Records Committee only 56 times from 2004 to 2009  and was recorded only in 7 sites. It has been recorded regularly only in Mt. Makiling. It is usually seen only at first light on the forest trail as foot and vehicular traffic easily spooks the bird, causing it to retreat to the dark forest undergrowth. There is no breeding information, except for a possible post-breeding dispersal as 130 individuals have been mist-netted and ringed in 7 years at Dalton Pass in Luzon, an important route for migrating birds.

Here we report the first observations of a nesting Ashy Ground Thrush found in a highly unlikely place within Manila – the La Mesa Eco Park or LMEP. The LMEP is a 33-hectare public park located on the outskirts of the La Mesa Watershed, the main water source for Metro Manila. The park has a mini-forest that is about 0.5 hectares and in this very small reforested area we have recorded at least 5 Ashy Ground Thrush individuals. The first sighting was reported September 3, 2011 after a group went to the park to check out the Red-bellied Pitta reported three weeks earlier. The group was surprised that they were able to observe at a very close distance on three instances the Ashy Ground Thrush in a small area of the mini-forest. The group submitted the sighting to the records committee of the bird club and shared the important sighting of the uncommon bird. The following day, September 4, another group of birders checked out the area and were able to see and photodocument two individuals.  One individual was observed to have a mouthful of worms leading to the idea that the bird was probably feeding some chicks nearby.

The group saw a probable nest but they were unable to confirm if it belonged to the Ashy Ground Thrush. On September 5, another group of birders went to check the thrushes and were able to confirm the nest to be that of the AGT. The nest contained three chicks.

Two individuals were again seen. One full adult and one that seemed to be a subadult individual. The full adult seemed to be the main gatherer of food, mainly earthworms, and was very shy and would fly off very fast and disappear in the undergrowth once it detected movement. The subadult individual also collected earth worms and delivered food for the chicks and was less shy and would sometimes get very near to the observers. Des Allen suggests that this subadult is possibly from a previous brood and is helping in the chores of feeding the chicks. There was also an instance when one of the parent birds delivered dried leaves, probably containing insects to one of the chicks. 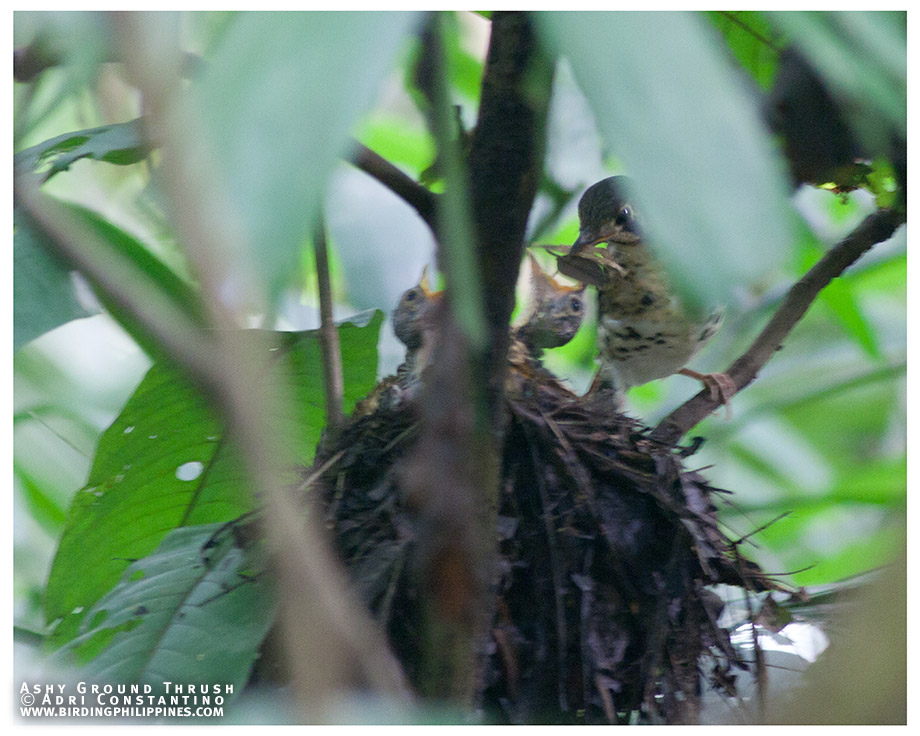 Both parents provided food for the chicks but they were never in the nest at the same time. This is probably to avoid attracting too much attention to the nest and leading predators to the nestlings. A Philippine Coucal, a well-known nest-raider, and a  Philippine Serpent-Eagle were seen in the vicinity of the nest. Of even greater concern are the large numbers of feral cats in the park. There were instances when birders on separate occasions reported the AGTs making alarm calls and possibly displaying decoy tactics to lure the feral cats away from the nest.  Sometimes, the parent bird would perch on a nearby branch first, then wait a few minutes before dropping down to the nest to feed the chicks. This is also probably a defense mechanism of the parents to prevent predators from finding the nest.

The nest was located 6 meters from the trail towards the undergrowth, 1.5 meters above the ground and was made up mainly of dried leaves and twigs suspended from two thin branches supported/braced on a larger main branch of a very small tree probably belonging to the dipterocarp family. The tree where the nest is located is on slightly sloping terrain with around 20 degrees inclination on very soft soil and near a puddle of pooled rain water where the adults were also observed drinking.

On the succeeding days, a number of birders observed the AGTs gathering food and feeding the chicks. The chicks would make soft chirping sounds whenever the adults were near. On occasion when the adults were absent, the chirping would attract other species such as Pied Fantail and Mangrove Blue Flycatcher to investigate the unattended nest. On September 12, two adults were observed followed closely by two very young fledgelings with very short, almost absent tails. When we checked the nest, there was only one chick left. The parent birds were still observed to be gathering food and feeding the chick but less often than before. It is possible that some of the worms were fed to the two fledgelings and some to the lone chick. By September 13, all three chicks were observed to have fledged.

Other birds were also observed to be nesting in this small area of the LMEP during this period. A Common Emerald Dove nest had been found not more than 8 meters away from the Ashy Ground Thrush nest. Scaly-breasted Munia nests were seen also a few meters near the edge of the park. There are also a number of birds with newly-fledged individuals: immature Red-bellied Pittas, immature Grey-backed Tailorbirds and immature Mangrove Blue Flycatchers were observed, indicating the successful breeding of forest birds in the small forested area of the park a few weeks before the Ashy Ground Thrush chicks fledged.

This successful breeding of the secretive, shy and hard to find, uncommon endemic Ashy Ground Thrush as well as other bird species in a small forested area of the La Mesa Eco Park highlights the significance of green spaces within the city that can serve as refuge for wildlife. Spillover from the nearby watershed can be accommodated by these green corridors if they can be established across Metro Manila. The Ashy Ground Thrush and the Red-bellied Pitta which are normally forest dwellers have also been reported at the nearby campus of the University of the Philippines in Diliman. It is also important that observation at the LMEP be continued regularly to verify if these birds have taken up permanent residence in this area or if their sighting at the LMEP is a result of local migration of these bird species.

video of the Ashy Ground Thrush nest by Tonji Ramos