Mention Villa Escudero to a bird photographer and the only thing that comes to his mind is Indigo-banded Kingfisher. That is because this tiny, active, and very colorful bird is a sure sighting at this resort located in Tiaong, Quezon province. To get an idea on how to capture the image of this resident feathered wonder let us hear Canon ambassador Ely Teehankee’s story:
space

I have been to Villa Escudero several times for the past 3 years. When I first saw the Indigo-banded Kingfisher (Alcedo cyanopectus) 5 1/2 inch (141 mm) I was amazed by the beauty of this small bird. Very often I was able to photograph this bird but always leaving something to be desired as far as image quality is concerned. Thanks to Mela (Carmela Balcazar, the resident birdwatcher of Villa Escudero) and her crew, who have improved the setup of the habitat so one could see the IBKF (Indigo-banded Kingfisher) more often in the open. Villa Escudero is one of the venues that Canon’s Photomarathon will have for this year and that gave me the opportunity to visit with my Canon friends and take pictures of this very desirable bird.

First, let me give you an idea on how the kingfisher habitat looks like:

This is dam that holds the river water and generates electricity for Villa Escudero. I think it was during the time of the Grandfather of Mela that this dam was built and created this mini waterfall. Visitors get a magnificent view of this man made waterfall while having their lunch at the bottom of the falls and experience the cold water running at their feet. 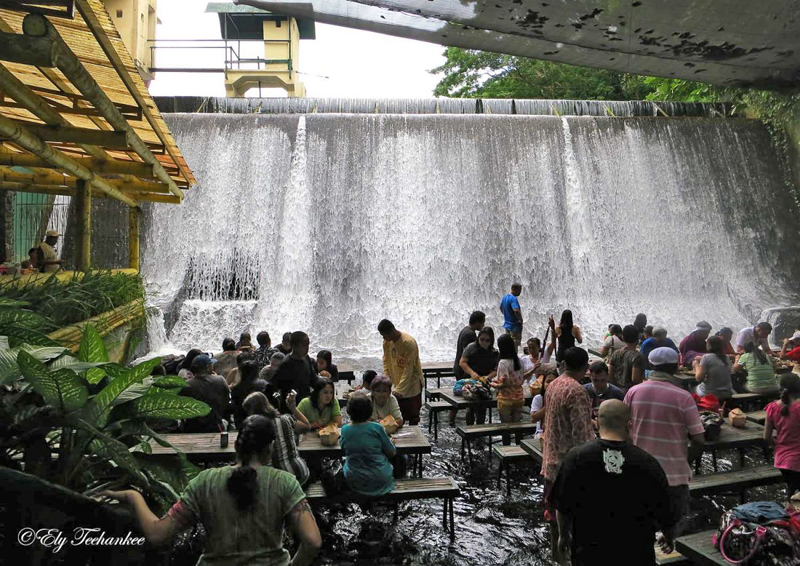 This is where the overflow empties into a smooth flowing river and where the Indigo-banded would hunt for fish and tiny crabs. 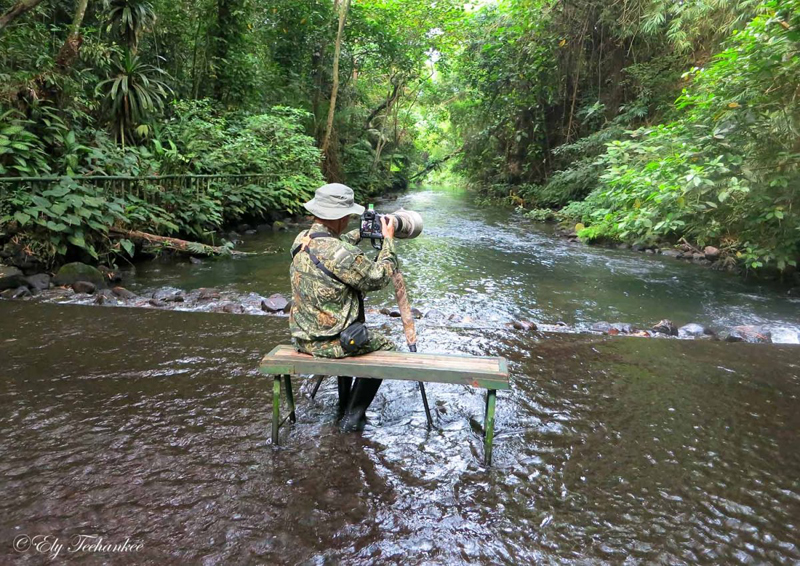 This is where the significant changes were made on the flow of the water to the river. Rocks were placed on the left hand side to soften the flow of the water while on the right side it was allowed to flow at a faster rate. A new area was created by placing boulders and rocks to slow down the current but allowing fish and crabs to pass thru thereby enabling the Indigo-banded Kingfishers a chance to catch their prey. 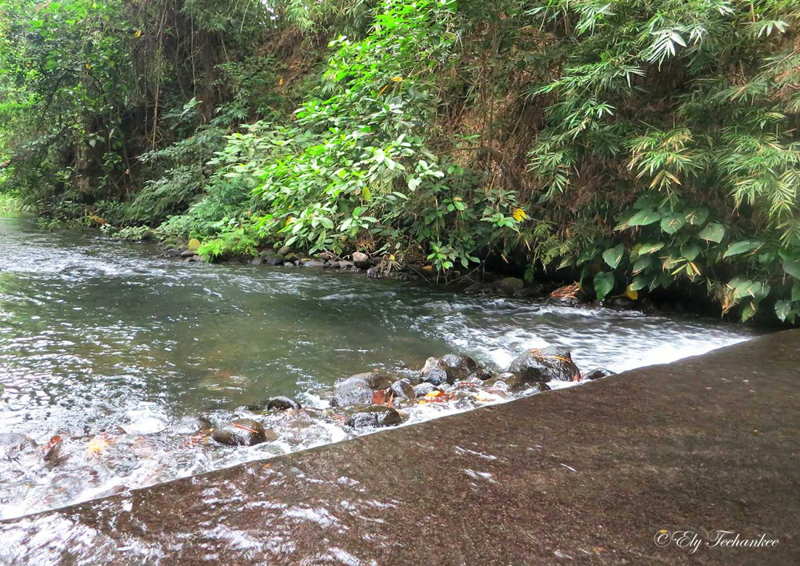 From where I sit this is how the habitat looks like. I wait for the bird to come. Sometimes it does not make any sound as it flies in silently, so you have to stay alert and be always on the lookout for the bird. The boulder that looks like an egg is the yellow-green color on the left side of the picture beside a clump of bamboo. From this distance it looks like an ordinary big rock but it is actually very big. 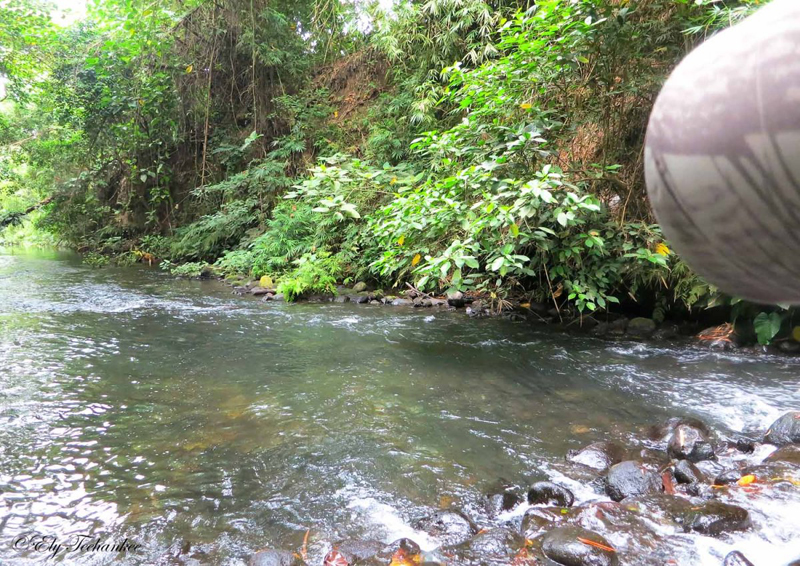 This is how the Indigo-banded Kingfisher looks like to the naked eye. He is underneath the bush, perched on on top of the biggest boulder a little to the left of the middle of this picture. That is how small it is when you see this bird in the wild. 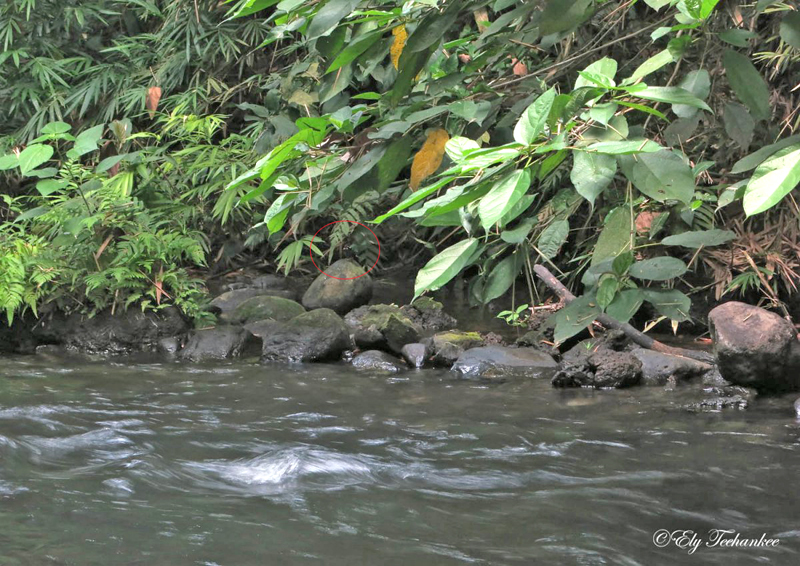 After taking some pictures, I will check it on the camera monitor, magnifying the image to check if the settings are correct. This picture on the monitor shows that the bird was taken at 1/20th of a second at a shutter opening of f/5.6. 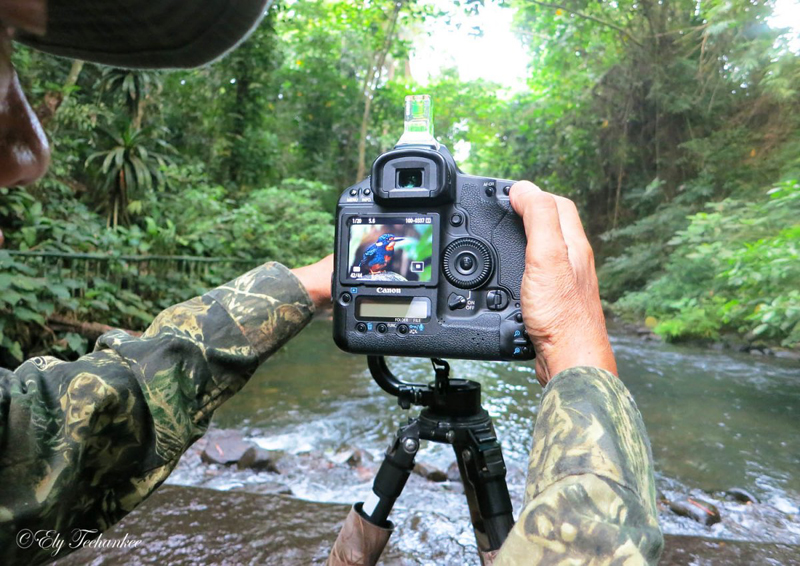 And now for some pictures of the Indigo-banded Kingfisher:

It is only now that I noticed that the male’s two bands create a shape of a heart on its chest. In a way, this bird can be classified as a love bird with a heart of love feathers on its chest. 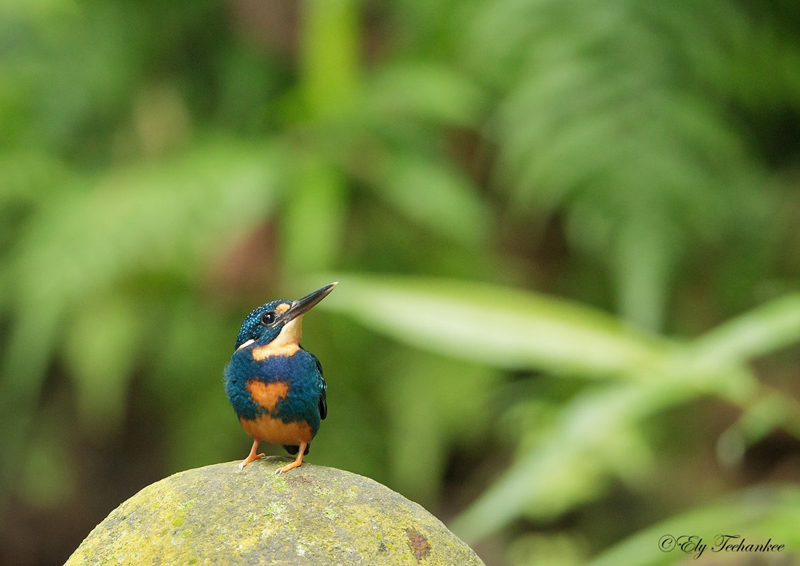 In this picture you can see the iridescent blue running the whole length of the bird’s back. The female was perched on this branch and you can clearly see the difference compared to the male as it has only one band on its chest and does not meet at all – unlike that of the male. 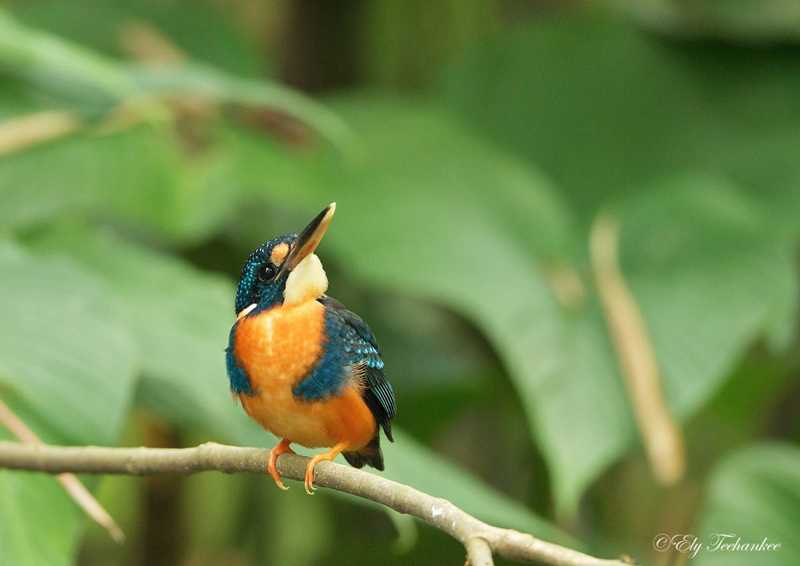 At first I though that the Indigo-banded Kingfisher was bow-legged but looking at the pictures I took, I realized that the bird had to stand this way to have a firmer grip on its perch for instant take off. This bird is more intelligent that what people give them credit for. Every time I see a beautiful bird, I am awed by God’s awesome creation.” space
So there you have it, folks gorgeous photographs and a great story.  A great combination that prompted Carmela Balcazar, resident birdwatcher of Villa Escudero, to write this comment:
“I have to say – this is definitely your best series yet Ely! Few photographers have managed to capture the ‘heart’ of the mature male indigo. The male is usually more wary and skittish, proving difficult to capture at times.
I specially like your personal accounts. For ordinary people like me, to read about the journeys and challenges of wildlife photography, as well as personal observations add insights and appreciation to the photos.
You just made me smile on this dreary day.”
Tagged bird photography, bird watching, birding, birds, birdwatching, ely teehankee, the blind spot, villa escudero