Ixi Mapúa shares how she was able to transform a piece of land into her own personal bird heaven with great views and great birds.
—

We dug the first holes for the foundation, raised our glasses (plastic but with real champagne!) and toasted to our home that was going to be built.

So, I left them to do their work and stopped my nagging. 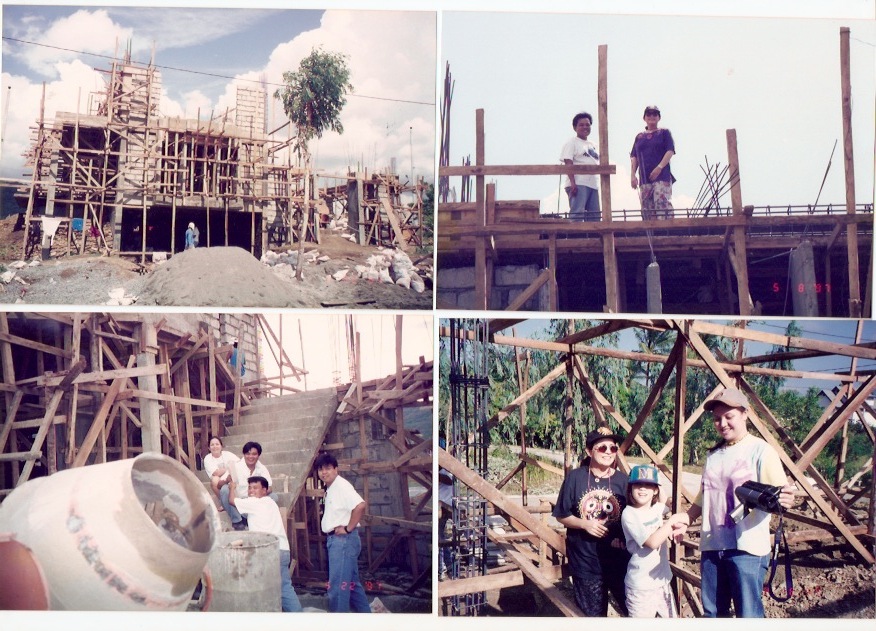 It was so much fun going to the work site to watch how the house was slowly starting to take shape.

The best part was the landscaping!  I hired a landscaper recommended by the architect and she turned out to be the BEST ever!  My only demands were : 1.  Ponds in the house, minimum of two, maximum of 4 (she gave me 4).  2. Fruit trees and trees with sweet smelling flowers.  So she planted mangoes, macopa, marang, champaca, ilang-ilang, jasmine and a lot of others.

Watching the house being built was exciting.  At the early stages I would bring a chair so I could watch.  Then I saw nice trees across the house and I brought a hammock and I could watch from the comfort of the hammock. 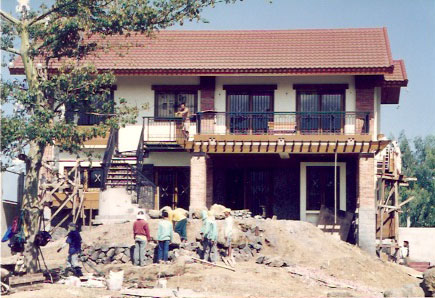 The house was finally finished in Dec 1998.  Almost 2 years in the making!  I had the biggest housewarming celebration the house had ever seen!  With a live band and all!

Looking at the pictures now, I never imagined my house turned out the way it did.  With the help of typhoons that knocked trees over, trees that rotted and died, the landscaping continues to change.

What helped mostly to the landscape change was when I started noticing the birds.  I was familiar with kingfishers but what the heck were those tiny little chattering twittering birds?  The only book I had then was the du Pont book on Philippine Birds.  Now, not knowing anything about birds then I found the book utterly useless, I could not identify the birds that were in my garden!  Darn!  I did have a pair of good binoculars and was able to see them clearer but still could not identify them.  I could not tell a ETS from a munia or a white-eye!  Bulbuls?  What were those????  I also thought we had hummingbirds in the Philippines when I first laid my eyes on a sunbird!

I immediately had aratiles planted and ordered lots of bignay trees from my landscaper!  Also bushes and plants with nectar producing flowers!

Serendipity came into play when I mentioned the unidentifiable birds to bff high school classmate Delia Unson one high school lunch sometime in 2005.  Turns out she was an avid birdwatcher!  She also asked point blank “Ixi, can I come over and sleep in your house so I can help you ID those birds?”

She did and there was no turning back.  She gifted me with my now well-worn and well used Guide to the Birds of the Philippines.  She introduced me to the Wild bird Club of the Philippines (WBCP) and I have not been happier since.  I  am now a proud member of the WBCP (since 2006!).

One of the best and funniest remarks I received was from a HS friends who asked “Ixi, what are you doing now?”  to which I happily replied “I am a birdwatcher!”  She then said “Isn’t that for OLD people???”  I honestly wanted to smack her in the face.  I wanted to ask her to accompany me to Kitanglad, to hike up to the Apo Sunbird site.. I wanted to ask her if she could make the 4 hour pony trek, the 3 hour walk up to camp Sawa, if she could take the early morning wake-up calls, the daily treks out, if she could take the leeches… I think not…

So, here I am happily living in my own Casa del Cielo, a bit of heaven on earth where just sitting on my balcony I can watch the sunbirds, munias, white-eyes and once (!) saw the Red Crested Malkoha on the bignay.  I also see coucals, colasisis and Red-keeled Flowerpeckers at the aratiles.

One of the best decisions my landscaper and I made was to keep the kapok tree where it is.  She once said we could chop it down but I said “NO!  It is the biggest tree here right now and I want to keep it!”  It has turned out to be my magic tree.  You will not believe the list of birds I have seen perched on it.  Some of the rarer ones are the Phil Hawk Cuckoo and the Black bibbed Cuckoo Shrike (Yes, Mikeli and I saw it, ID’d it and is one of those “dagnabit days” that I did not have my camera at hand, it was on April 15, 2011).

When I became aware of migratory season and noted the egrets and terns flying above, I would go to my neighbor’s house to go to her rooftop to take photos.  After several years, I threw a tantrum! I wanted my own roofdeck so I didn’t need to go to my neighbor’s!  I got my roofdeck and there I sometimes take my merienda and cocktails to watch the migrants.  I also can watch the sunset from there.  It is never the same but always beautiful.

The roofdeck was a great addition to my birdwatching activities.  It was there I saw the murmuration of about a thousand Chestnut-cheeked Starlings (April 1, 2012, with pictures!) that I originally thought were terns until I looked at my camera! 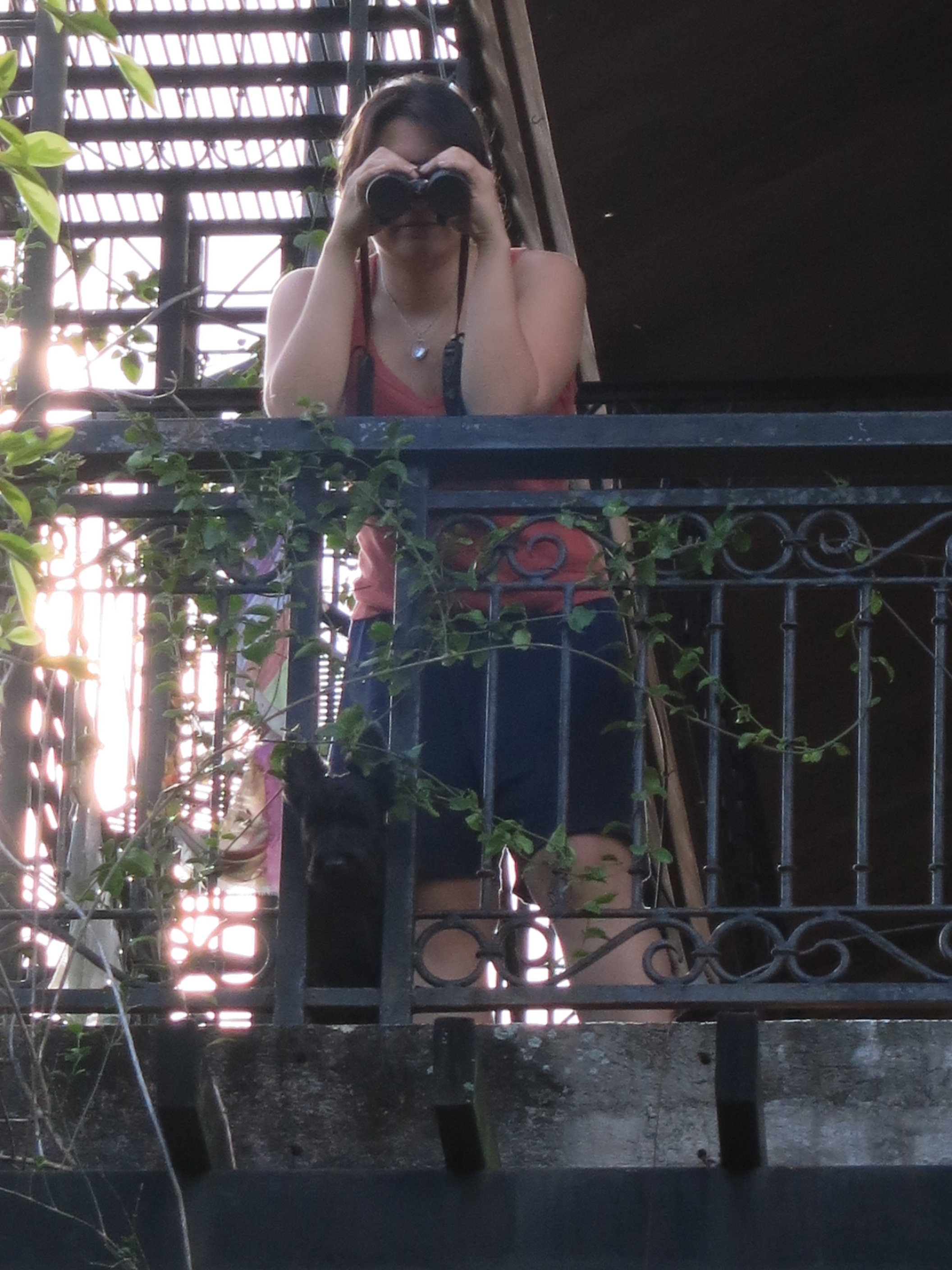 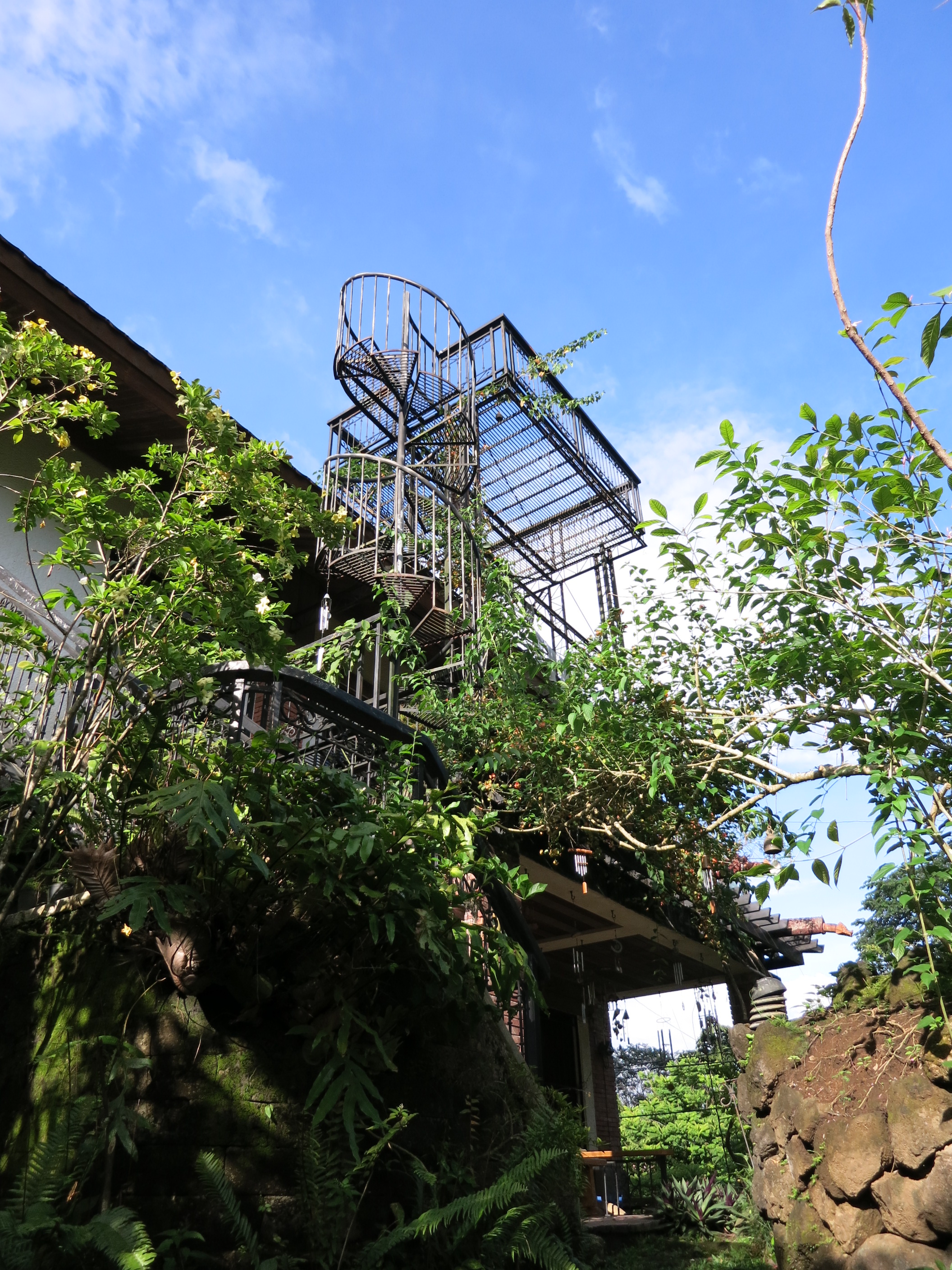 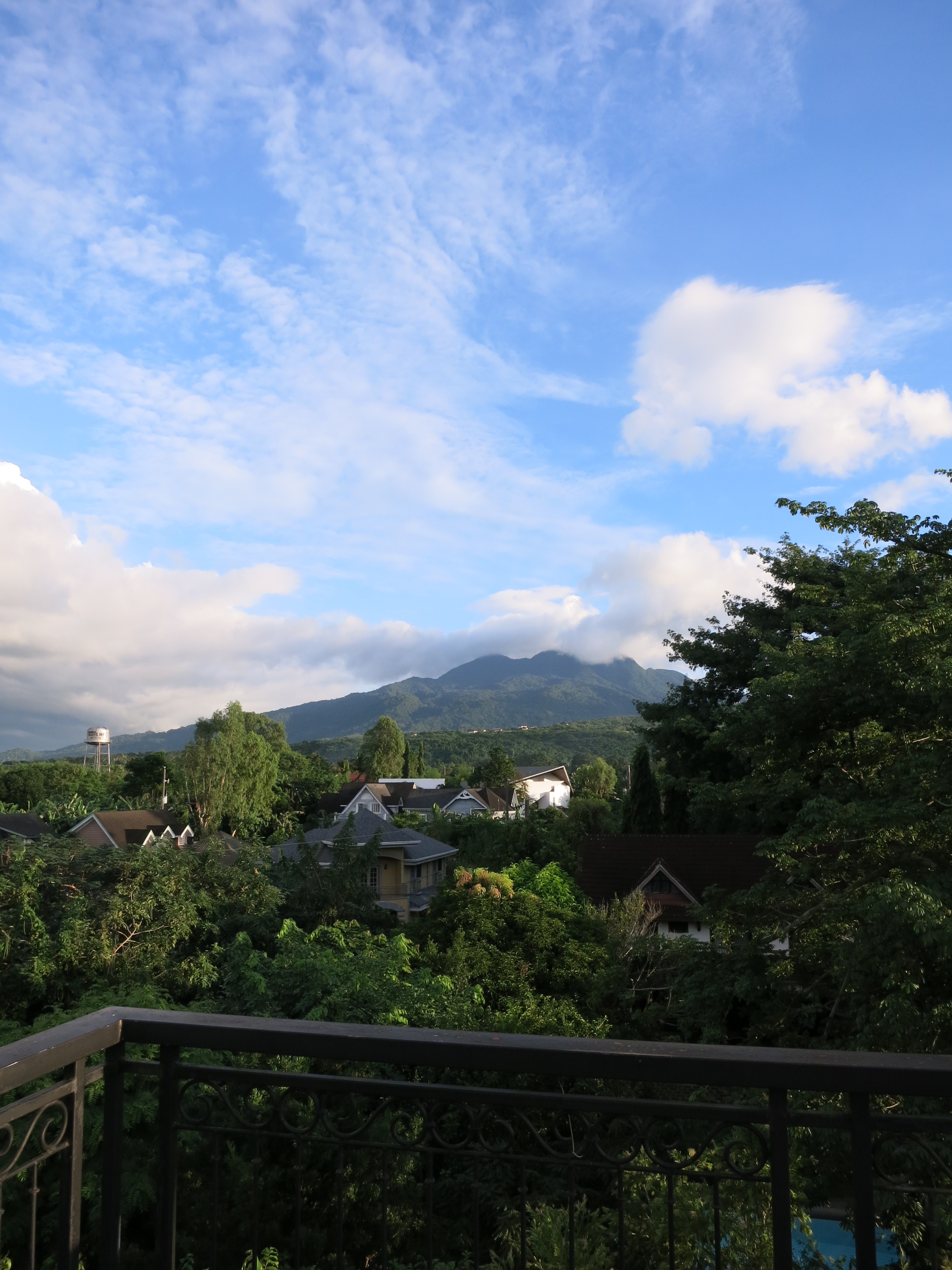 I have a list of the birds seen and listed around my house and surprisingly I still get lifers!  When rainy season started, I told Leo (my gardener and also member of WBCP) to make a small lake at the empty lot across my house (I turned it into a mini-forest) and I was rewarded with the sighting of a White Breasted Waterhen!  First subdivision lifer for 2013!

Second subdivision lifer for this year was the Chinese Goshawk sighted Nov 21!

I don’t only have birds, I have butterflies, colorful insects and snakes too!  I have documented at least 5 in my garden!  Twice we found them in our house but they were carefully captured and released.  I have a resident monitor lizard in my pool wall.  A shrew got caught in a rat trap once and when I was told it was a shrew, I immediately released it.

My garden never ceases to amaze me.  I also never thought I would live to see the day that I welcomed caterpillars to eat my plants.  They will turn into lovely butterflies if left alone!

So here I am, in my heaven here on earth.  Never bored.  There is always something to do, something to look at, and if there is nothing to do the best place to do it is on my roofdeck, sipping my cocktail and watching the birds, the sunset and time go by. 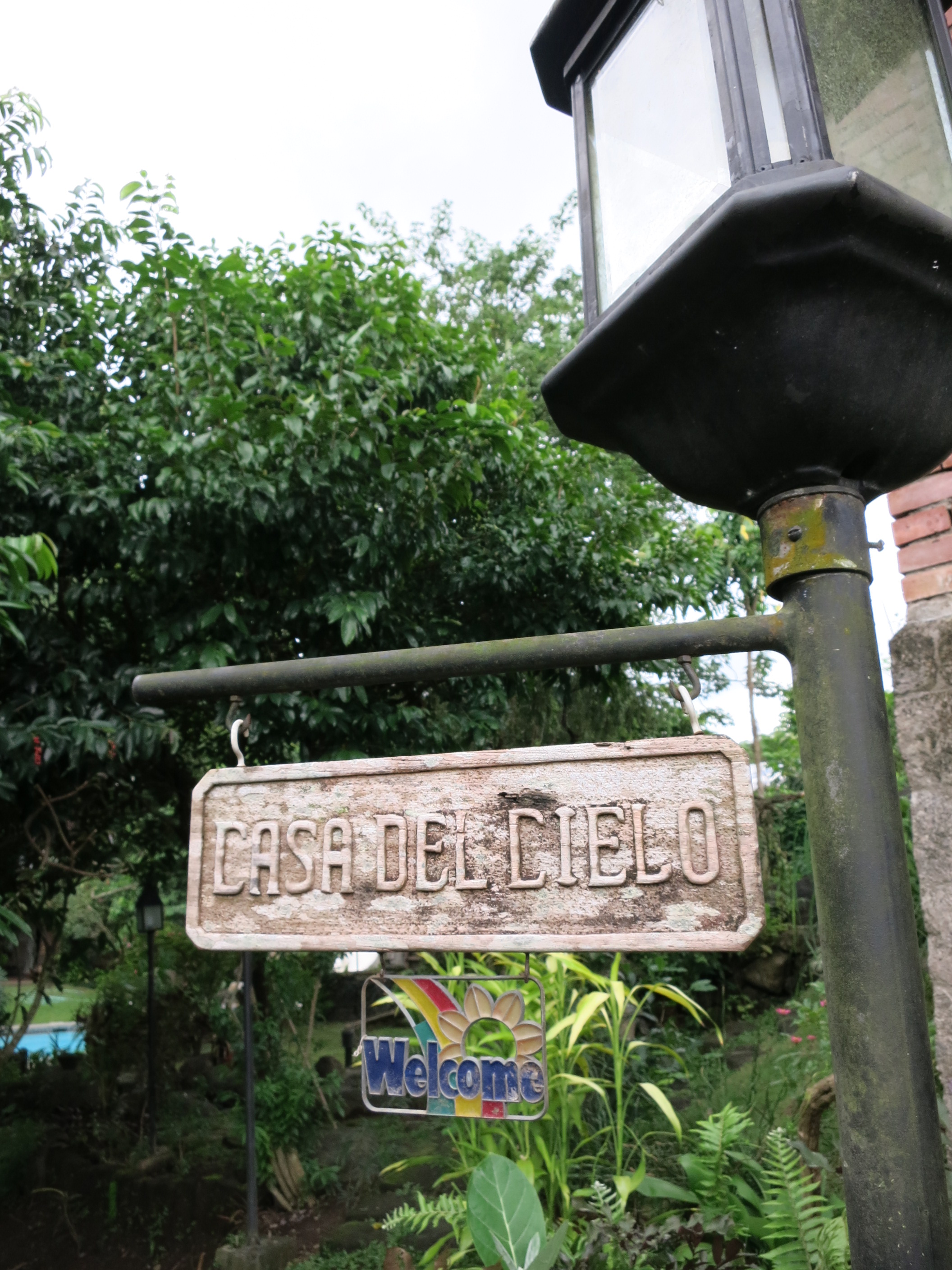 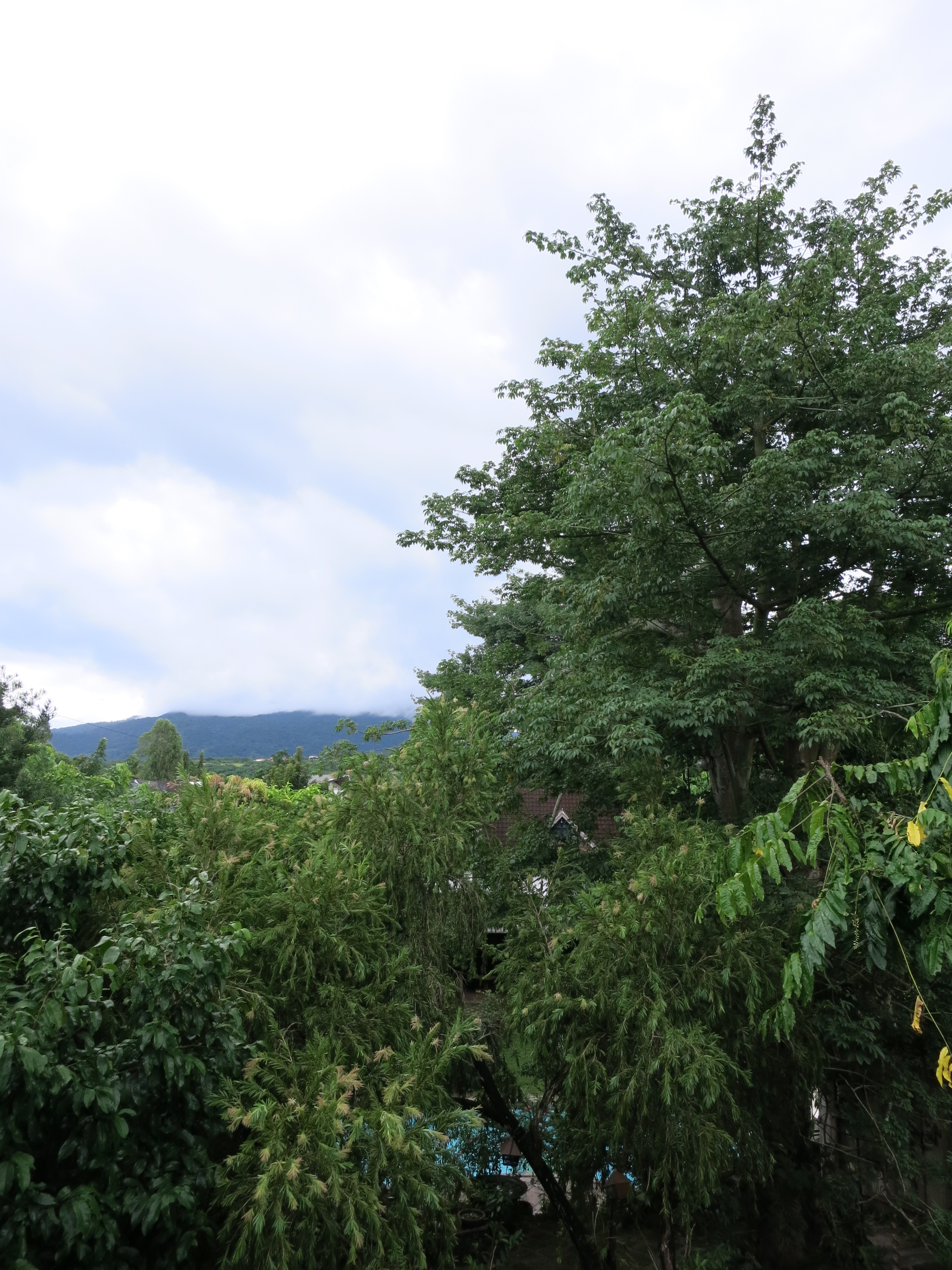