Philippine birders have a lot of big changes to tackle in 2014 with the release of the new WBCP checklist. There are new English names, new species, and re-ordering of families. WBCP Records Committee member Desmond Allen guides us through the new checklist.
—

Finally, at long last, the WBCP checklist of the birds of the Philippines has been updated by the Records Committee team. It has been a long and arduous journey and the six principal voyagers are listed strictly in alphabetical order in the first row of the file. The previous WBCP checklist was based on the only complete guidebook that we have – A guide to the birds of the Philippines by Bob Kennedy, Pete Gonzales, Edward Dickinson, Hector Miranda and Tim Fisher, published in 2000, and often called the Kennedy guide (KG). Using this has always been sensible since the names in that book are the ones that most birders these days are going to see and use. However, much has changed in the Philippine bird world in the last 13 years, and we have needed to take account of that.

Each year, as previously unrecorded species were observed and documented we added them to the list in blue font, using the names in the Howard and Moore (H&M) checklist of birds of the world version 3, published in 2003. This has kept the total list of bird species up-to-date. However, revisions to the names of birds by ornithologists have been sweeping around the world, resulting in a plethora of unfamiliar names for many Philippine birds and we have needed to take account of that for the sakes of all WBCP members.

H&M was based on the Peters’ checklist of birds, a mammoth undertaking that took decades to complete, and which in many instances lumped many geographically separate species into a single species with many subspecies. This ‘lumping’ was done often  without any knowledge of the songs or calls of the birds involved, and certainly with no knowledge of their genetic ancestry. In the last decade, however, year by year, sometimes even month by month, new research results, indicated that these large groupings are inappropriate. Many of the revisions are the results of DNA analyses that suggested that apparently similar birds on different islands are much less closely related than museum specialists used to think. Birds that were originally listed as full species in their original descriptions of a hundred or more years ago, and had been lumped by  Peters et al., are regularly being ‘split’ or ‘unlumped’ into two or more species, often back to the original. The two world checklists readily available to birders online are the Clements list and the IOC list. The IOC list is updated every 3 months, with proposals for splits and lumps being posted on the website as soon as they are published, and has a large committee of professional ornithologists. Given that the coming years will see many more taxonomic rearrangements, the committee felt that it be more appropriate to follow this list. So in almost all circumstances the new WBCP list follows the English names of the IOC list.

If you open the excel file of the new list you will see that the English names, including many unfamiliar ones, appear in the left column D, but to its right are the comparable names from the KG (column E), to help those who  are feeling lost. Moving right, next is a column indicating splits. Only those species whose names have changed, or from which one or more other species have been split ,are indicated (S, SE, SN). At the end of the list  (rows 858+) are notes explaining these acronyms. Beside this column is the scientific name, usually based on Latin. These names are those used  in the IOC list, not those in the KG. Next is the range: resident, migrant, endemic, etc., followed by two threatened status columns, the first BirdLife, the second DENR, again explained below the list. 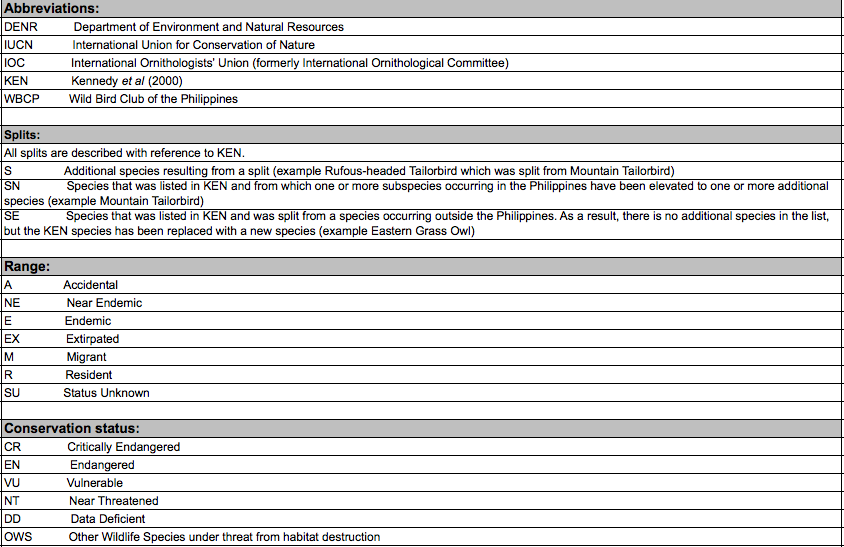 The notes column (K) to the far right lists an eclectic mix of other information that you might want. It lists the sources for the additional new species, with dates, locations and names  of observers; it  comments on some new breeding records, and introduced species; it points out species that have not been recorded recently, and endemics that have occasionally occurred outside  Philippine territory; and scientific names that differ from the KG, usually as a result of taxonomic rearrangements, are listed.

Finally, the left three columns A-C allow you to sort the list and regroup birds as you need. This is most conveniently done on the second page where we haave avoided merged cells. For example, select rows 1-858, then Data from the menu bar (or just Sort from the menu), then Sort  by column D and you can put the birds in alphabetical order, or by column H and you will group all the birds of similar range together eg all the endemics. You can also sort within sorted groups to fine tune your list. Column A allows you to resort back to the present format.

This is certainly not a final list. As you know, new species are added each year as the ever greater numbers of observers and photographers document rare, wayward migrants. Moreover, there is still a huge amount to learn from the genetics of birds on the long-isolated, different island groups  that will almost certainly result in many more splits being accepted by IOC. Some of these, such as Philippine Collared Dove, are still waiting in the wings as you can see from the proposed splits page. The use of the IOC English names does not mean that all of us records committee members are satisfied with these names. Far from it, and we will be trying to persuade the IOC of the need for some changes, and will be giving our advice when new names are needed. So this list should be seen as a work in progress. We expect to post regular updates with more new birds, eg Richard Ruiz’s Mandarin Duck, and more exciting new English bird names to get to grips with, in due course.