The 19th Taipei International Birdwatching Fair was held in Taipei City, Taiwan from the 21st-22nd of October 2017. The activities began at the eve of the bird fair on the 20th with a Welcome Dinner for all participating local and international delegates. This was held at the lobby of the Taipei City Hall and hosted by the local government under Mayor Ko Wen-je and the Wild Bird Society of Taipei (WBST.) The Wild Bird Club of the Philippines, being a partner of WBST, was represented by Babie Magadia and myself for this year’s bird fair. Also representing the Philippines to observe and participate in the bird fair was a delegation from the City of Balanga (COB) led by Councilors Vic Baluyot and Atty. Joy Panganiban, and COB representatives Bgy. Captain Rogelio de Guzman of Bgy. Tortugas, Allan Torres and Ms. Lolit del Rosario from the COB Tourism Office.

A brief program was given with welcome remarks and introductions from WBST President Thin-by Liu and Ms. Wen ying Lee, Deputy Secretary-General of Taipei City representing the local government. During the opening remarks from the leading conservation society personalities, I found a new idol in Mr. Nortiaka Ichida , Senior Advisor of BirdLife International, Japan. Mr. Ichida gave a short talk on being one of the proponents in conservation of the Grey-faced Buzzards in Taiwan which started way back in 1978, paving the way for heightened awareness on the bird conservation efforts in country.

Various government agencies from Taipei City were also represented, while other local Taiwanese bird clubs were also there. Birding societies from Hong Kong and China also attended: the Hong Kong Bird Watching Society,  the Eco-Education Resources Centre, Fujian and Chengdu Birdwatching Societies. Several birdwatching clubs from Asia also sent their delegates with our very own Wild Bird Club of the Philippines, Wild Bird Society of Japan, Cambodia Nature Birding Club, Bird Conservation Society of Thailand, and the Bird and Wildlife Team from Sri Lanka. After a short program and awarding of tokens from WBST , a jazz quartet entertained the guests throughout the night . The evening ended early as the delegates headed back to HuaShe Hotel in Beitou, where all the delegates were billeted for the following day’s ceremonial opening.

The 19th Taipei International Birdwatching Fair officially opened on the 21st of October 2017. This year’s theme was “Birdtopia of Happiness – Let Humans and Birds Live in Harmony.” The fair’s theme bird was the Common Kingfisher, a migratory bird that passes through Taiwan during winter season. The Taipei International Birdwatching Fair was a collaborative effort between the government and private individuals in raising awareness between the coexistence of people and nature, emphasizing the importance of birds as indicators of a good environment . Being one of the Asia’s most prestigous and largest bird fairs, the event was held at the Guandu Nature Park, located in the East Asian Australasian Flyway , one of the major bird migratory routes in the Asian region having a rich landscape consisting of 57 hectares of a biodiverse enviroment hosting hundreds of species of birds, mammals, reptiles, fishes and a vairety of botanicals.

Hundreds of booths were set up highlighting the bird species of the different localities represented. Educational materials were set up to teach especially the children, about the birds in relation to their habitat, bird art which was showcased in different activities through coloring, puzzle construction, and even the application of colore sugar icing on bird cookies. A variety optics equipments were displayed and sold- from multiple spotting scopes to the more convinient smaller binoculars, a birdwatchers haven! A delightful place to shop for organic bird oriented agricultural products to bird themed merchandise from t-shirts, birding accesories to button pins and stationery materials!

The Wild Bird Club of the Philippines booth was grouped with the other international bird club participants. We displayed tarpolines with the Philippine Kingfisher series designed by Jon Villasper. The Philippine Eagle t-shirts designed by Arnel Telesforo were instantly sold out during first hour after the bird fair officially opened. Pamela Lim was a very helpful interpreter in explaining the plight of the Philippine Eagle and the conservation efforts of the Phil. Cockatoo, which the bird club actively supports in raising funds by selling the Katala notebooks made out of recycled paper. Books came next, as birdwatching enthusiasts purchased guide books with the intent of future visits to the Philippines. The cloth eco-bags from Balanga also moved so fast that people were still looking for this item during the second day of the fair. A delegate from the Fujian Birdwatching Society was almost heart-broken when he returned to the WBCP booth to purchase a book only to find out that it was already sold and is out of print in the Philippines.

I was also happy to meet again Scott Weaver, a WBCP member and a Taipei resident who volunteered to help out in the booth but opted to go around the bird fair grounds instead upon seeing that the items for sale were already sold. Guests also came to the booth to discover more about the Philippines and was amazed at the total of 683 bird species of which 239 of these were endemics. Some of the locals simply approached us to be able to converse and practice their English.

Excited to finally meet Kung-kou, also known as Arthur, WBST member who coordinated, facilitated and arranged everything related to the WBCP’s participation in this years Taipei International Birdwatching Fair. Babie and I also reunited with Taipei based Renny Chan, a WBST member involved in bird rescues, a fellow participant in the 9th Phil. Bird Festival of 2014 in Zamboanga City. Dr. Yun Lung, past WBST President also came, having participated in the 10th Philippine Bird Festival in Bataan in 2015. Ms. Chen and Ms. Shuang Fen alo visited us in the WBCP booth, bringing with them presents after representing WBST at the 11th Katala Bird Festival held last June 2017 at Narra Palawan.

The 19th Taipei International Bird Fair ended Sunday afternoon of the 22nd of October, 2017. Despite a rainy day start on the 21st of October, the weather began to clear up and cool weather began to set in. Droves of people came to visit the fair grounds at Guandu Nature Park. Birdwatchers, nature enthusiasts, families with children and grandparents came to participate in the various activities from simply taking a stroll in the park to watching birds on the observation deck or simply listening to the jazz ensemble that played in afternoon at the center stage. I even had a chance to do a little bit of birdwatching on Guandu Nature Park’s Observation deck, spotting an lifer, the Sacred Ibis! So many things learned just by observing the interactive exhibits at educational section of the Guandu Nature Park museum or those puzzles designed by Taipei’s Forestry Bureau.

This was also my first time experience in taking the MRT from our HuaShe hotel in Zhongyang to Guandu station and walking several blocks to the Nature Park during the last day of the bird fair! Quite a novelty, since most of the time delegates were transported in buses.

Admirable too is how I would describe the passionate concern of the Taiwanese people for the environment. Recycling was already second nature for them . Lunch tins were used for packed lunches, some even carried their own cutlery and chopsticks, styropor packaging, plastic spoons and forks were nowhere to be found. Everyone even brought their own water bottles , with water refilling stations stragtically located everwhere within the nature park.

One of the advantages of attending international bird fairs was being able to sample the local cuisine. Delegates were treated to a feast on the first day of the bird fair at the Dama Restaurant in Beitou with no less than 10 courses of Taiwanese dishes! Food continuously came until finally the clear soup was served at the signalling the end of the meal followed by a platter of fresh fruits for desser , certainly a unique feature of a Taiwanese dinning experience! According to Dr. Thin-by Liu, current WBST President, an event can only be considered a success with the serving of good food, and that I must totally agree! 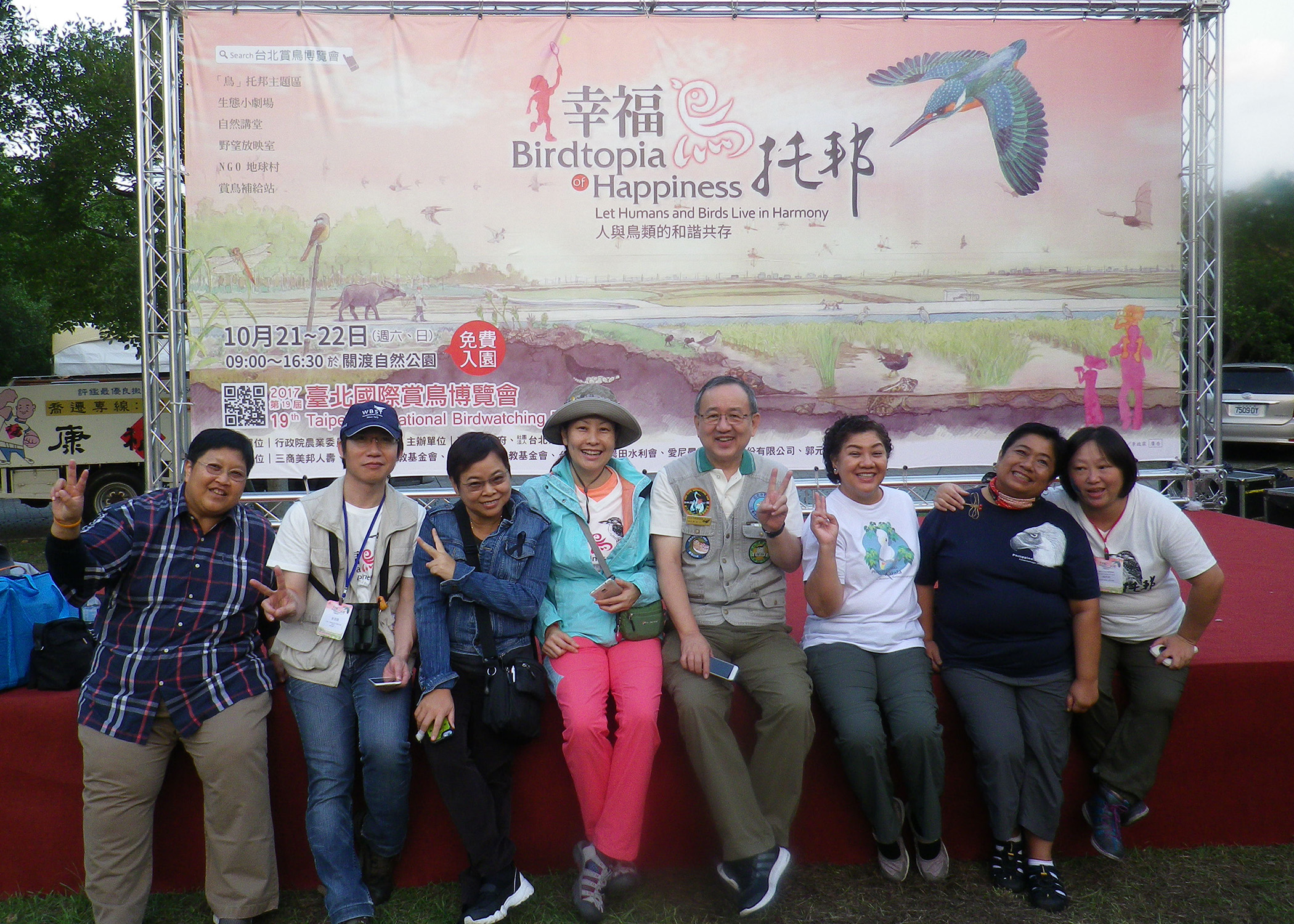 The 19th Taipei International Birdwatching Fair officially ended by 4:30 pm, Sunday 22nd of October. Congratulations to the Wild Bird Society of Taipei and the local government of Taipei for organizing a very successful event. Truly a wonderful personal experience of learning, sharing and caring. Yes, bird fairs bring about people who are nature enthusiasts bound by a common passion for birds. But I believe that these events too serve as bridges in connecting people beyond boundaries and cultures just like the birds that can fly free crossing beyond borders. Definitely encouraging other WBCP members to experience this international event that I have participated. I am hoping to be able to join the Taipei International Birdwatching Fair again in the very near future.