The 8th Asian Bird Fair -2017 at Ulsan, South Korea “Bringing People Together for the Love of Birds and Habitat”

The 8th Asian Bird Fair -2017 at Ulsan, South Korea
“Bringing People Together for the Love of Birds and Habitat”
by Tinggay Cinco 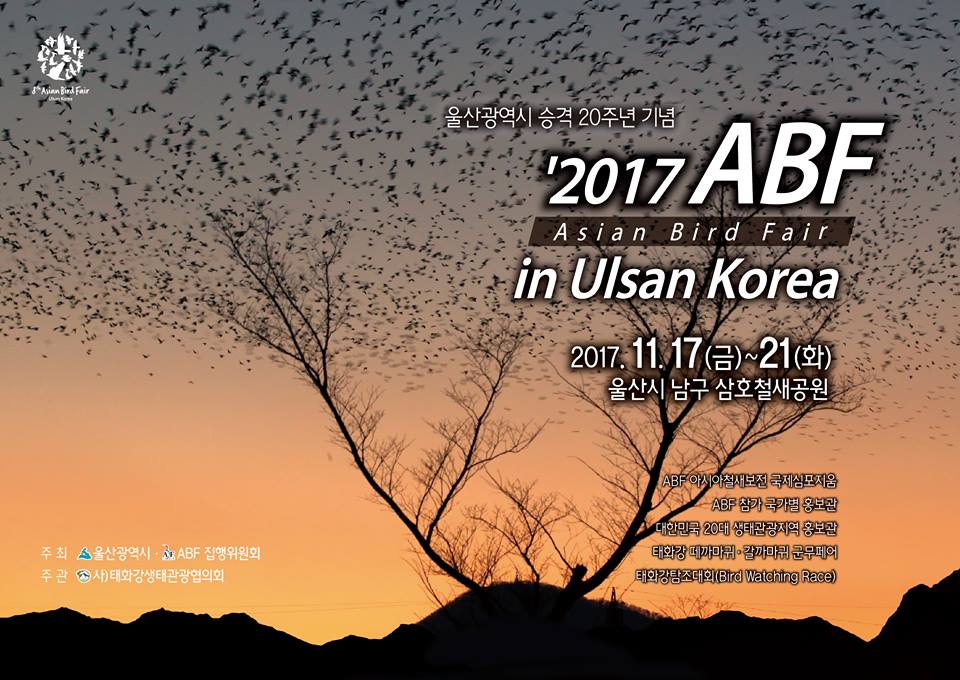 Much excitement was drummed up from the time of the announcement for the venue of the 8th Asian Bird Fair in Ulsan,South Korea during the 7th ABF in Jingshan, PROC last November of 2016. Originally slated for February 2017, the date was moved further to November 2017 due to some unforeseen circumstances in Korea. Definitely, the change in time made the organizers in Ulsan better prepared for this very successful event.

The Metropolitan City of Ulsan is located in the South Eastern part of the Korean Peninsula. Ulsan is one of South Korea’s seven major cities with the highest per capita income in the entire country. As a leader in South Korea’s industrial growth, and a gateway for the country’s major export products like automobiles due to its expansive harbour, the metropolis unfortunately suffered the consequences of a being an economic giant- pollution! The greatest damage was done to the 47.2 kilometer Taehwagang River which ran across the city, where industrial toxic waste and untreated sewage were dumped. In the year 2000, the local government together with its concerned citizens began a massive campaign to turn around a heavily polluted Taewhagang River into a waterway thriving with new life. In less than 20 years, the people of Ulsan reversed the once polluted Taehwagang into an ecological river wherein hundreds species of plants and animals thrive, eventually becoming the home of migratory birds during the winter and the breeding grounds of egrets during the summer. Because of an increasing environmental awareness among its citizenry, Ulsan accepted the challenge of hosting the 8th Asian Bird Fair as a venue of transformation from an industrial giant to a significant eco-tourism area. The 8th Asian Bird Fair in Ulsan was held from 17th to the 21st of November 2017 coincidental with the 20th Anniversary of Ulsan being proclaimed as a Metropolitan City.

The two day 8th Asian Bird Fair proper opened on the 18th of November by the expo garden grounds along the river banks of the Taehwagang . Conservationists birdwatchers, eco-tourism tour operators and nature enthusiasts from more than 20 countries worldwide were joined in by local Korean organizations, converging at the exhibition site to showcase each of the countries avian species, nature highlights and conservation efforts. There were more than 80 exhibition booths in the ABF fair grounds. Forums were set up in the indoor stage with foreign and local resource speakers who spoke in their areas of expertise in the fields of ornithology, conservation and eco-tourism. Local exhibition booths displayed posters of tourist attractions , an assortment of agricultural/fisheries products, re-cycling practices , together with traditional Korean arts and crafts.

In the afternoon of the opening day, Ulsan Metropolitan City Mayor Kim Gi-hyeon enjoined by local government officials and civic leaders graced the 8th Asian Bird Fair program proper welcoming all the local and international delegates, with speeches delivered emphasizing on Ulsan’s environmental rehabilitation program . One of the program’s highlight wa a cultural presentation featuring the traditional dance of the Red-crowned Cranes.

As sunset was fast approaching, all the delegates gathered outside the main exhibition tent to witness the dance of Rooks and Jackdaws numbering by the thousands, dominated the sky before returning to their roost along the environs of the Taehwagang River. Sundown comes early during autumn at around 4:30 pm, and soon it became dark. Time to head back to Hyundai Hotel for the Welcome Dinner hosted by Ulsan City Mayor Kim Gi-hyeon.

There were four official dinners during the entire duration of the 8th Asian Bird Fair. On the eve of the ABF the local organizers sponsored the first dinner after the registration of all delegates. It was a time to reunite with familiar faces from past ABF attendees and former participants of the past Philippine Bird Festivals. A formal sit-down dinner was held on the 18th of November hosted by Mayor Kim Gi-hyeon to welcome all the delegates of the ABF. International delegates came in their native attire, transforming the usual casually dressed birders into elegant individuals. The Philippine delegation presented Mayor Kim with a watercolour painting personally painted by yours truly. It was a very touching moment for the WBCP when the mayor reciprocated with a heart warming response to the group by saying “God Bless the Philippines!”

The succeeding nights were fun filled dinners. An ABF fund raising activity was held on the third night through a silent auction and raffle modelled after the WBCP’s very own activity during anniversary and Christmas parties. Highest bidders competed against each other, with the Koreans purchasing the most number of raffle tickets only to give way to lady luck with Lily from Alpine Birding Tours of the PROC winning the most number of items, seconded with Doris from the Wild Bird Society of Taipei. The turn over dinner from the present to the incoming host took place on the last night of the 20th of November. The event was hosted by the city of Chiayi, Taiwan, the next ABF venue for the 9th Asian Bird Fair to be held from 16-20 November, 2018. The Taiwanese delegation sang a popular Mandarin song entitled “ Yue Liang Dai Biao Wo De Xin” (The Moon Represents My Heart). It was also a night of revelation, when an impromptu rock & roll number was rendered by Gunner Engblon of Kalibri Expeditions, Peru by engaging the crowd to sing and dance the night away.

There were several opportunities for birdwatching during and after the Asian Bird Fair. In the early morning of the 19th , Mr. Hwang of Taehwa River Eco-Tourism led a group of delegates to view the incoming flight of the Rooks and Jackdaws along the banks of the Taehwagang River. A very challenging moment bird watching in sub-zero temperatures! As one of the culminating activities during the last day for the 8th ABF, a birdwatching tour was done along the different points of the Taehwagang River guided by local Korean bird experts. Among my personal lifers were the Rooks, Jackdaws, a Herring Gull and the Common Merganser. The birds were quite to easy to view, but the low temperatures and chilling winds were very difficult to cope especially for people who came from the tropics . Outside temperature ranged from a low -3 degrees Celsius, with a wind chill factor of -5 degrees Celsius to a high of 5 degrees Celsius. One of the whole day post ABF tour highlight was a visit to one of Korea’s National Treasures, Bangudae Petroglyphs, a pre-historic site depicting the Koreans ancient way of life.

By the 21st of November, all the delegates went their separate ways. Most of the WBCP members opted to take a day-tour of bird watching before taking the flight back home, Karen went onwards to Seoul while Babie and I took a leisurely day off before proceeding to Gimhae International Airport in Busan for the late evening flight to Manila. Having attended four of the eight Asian Bird Fairs, each and every bird fair was a unique experience in itself. In every country I have attended was marked with varying the landscapes, culture and even bird species that definitely lengthened ones life list. I envy our very own Tintin Telesforo and Willy Foo of the Singapore Nature Society, both ABF loyalty awardees for having attended all the eight Asian Bird Fairs. The 8th ABF in Ulsan definitely will long be forever remembered. From the very cold Autumn morning birdings, the traditional Korean meal shared among the delegates, to the minute details of disinfection for the prevention of any occurrence of the avian influenza due to the presence of migratory bird.

Congratulations to the ABF Executive Committee for all their hard work in successfully putting together such an enormous event. Kudos and a big “Thank You” to the local organizers and volunteers in Ulsan led by Mr. Hwang In-seok who indefatigably supported all the needs of the delegates. One cannot help but to feel a little bit sentimental on the last day , when I was on the way to the airport, I felt a little pinch in the heart after watching the Philippine flag being lowered, since Babie and I were the last Filipinos to check out of the Hyundai Hotel in Ulsan.

Yes, every delegate shared a common love for birds and an absolute passion for the environment. A dedication for nature conservation bonded all these people of different nationalities transcending boundaries of race, language and culture. An achievement true to the 8th ABF’s motto of “Bringing People Together for the Love of Birds and Habitat.” We all believed that there were no permanent good-byes amongst us, only provisional farewells till we all meet again next year. I am fervently looking forward to the events that will transpire for the 9th Asian Bird Fair come November 2018 in Chiayi, Taiwan. 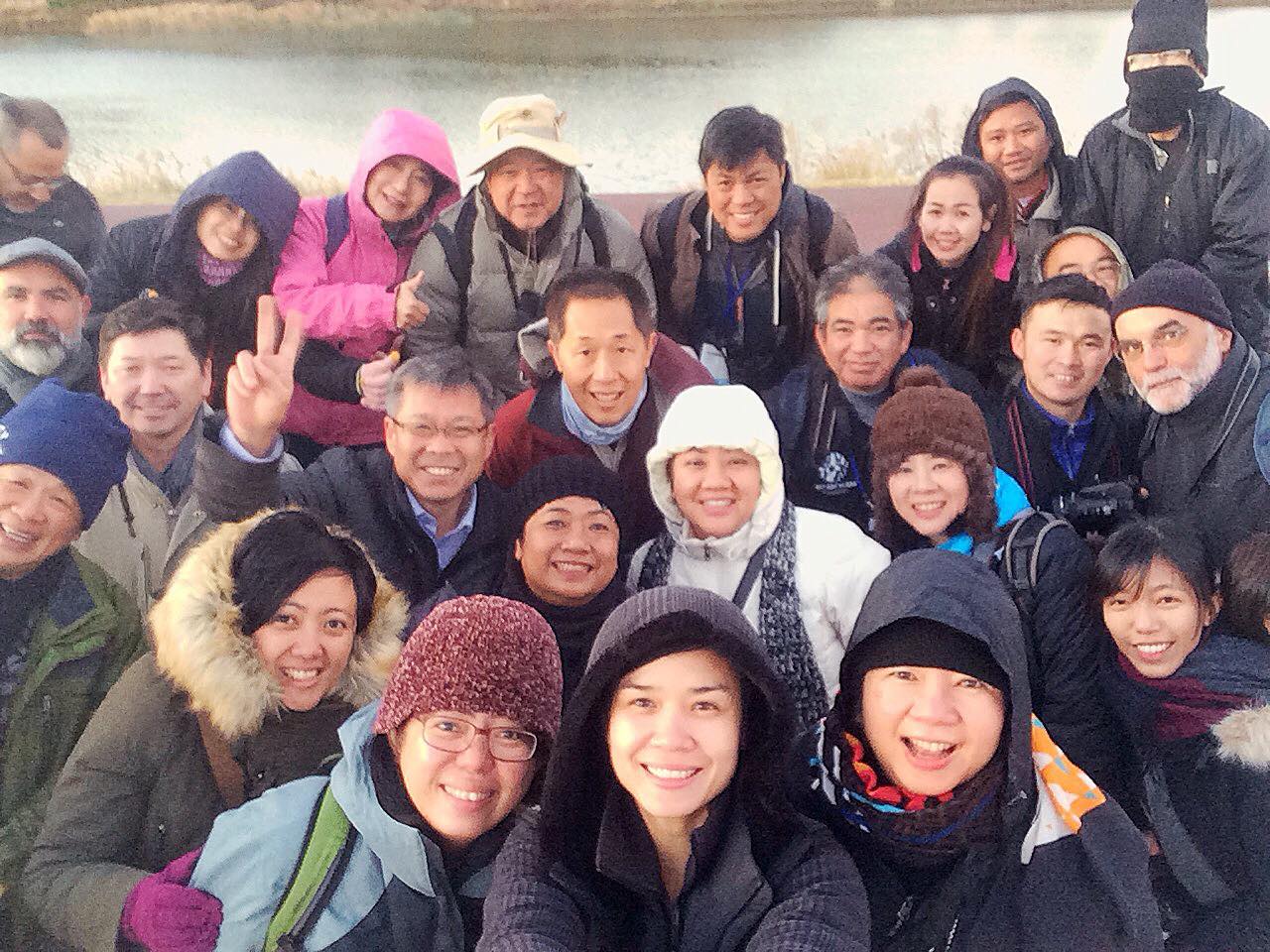