Wild for Wetlands 2018 was held at the People’s Park in Sucat for its second year. Last year, the focus was on Manila Bay. This year, Laguna de Bay was the focus and our venue was right by the side of the lake. 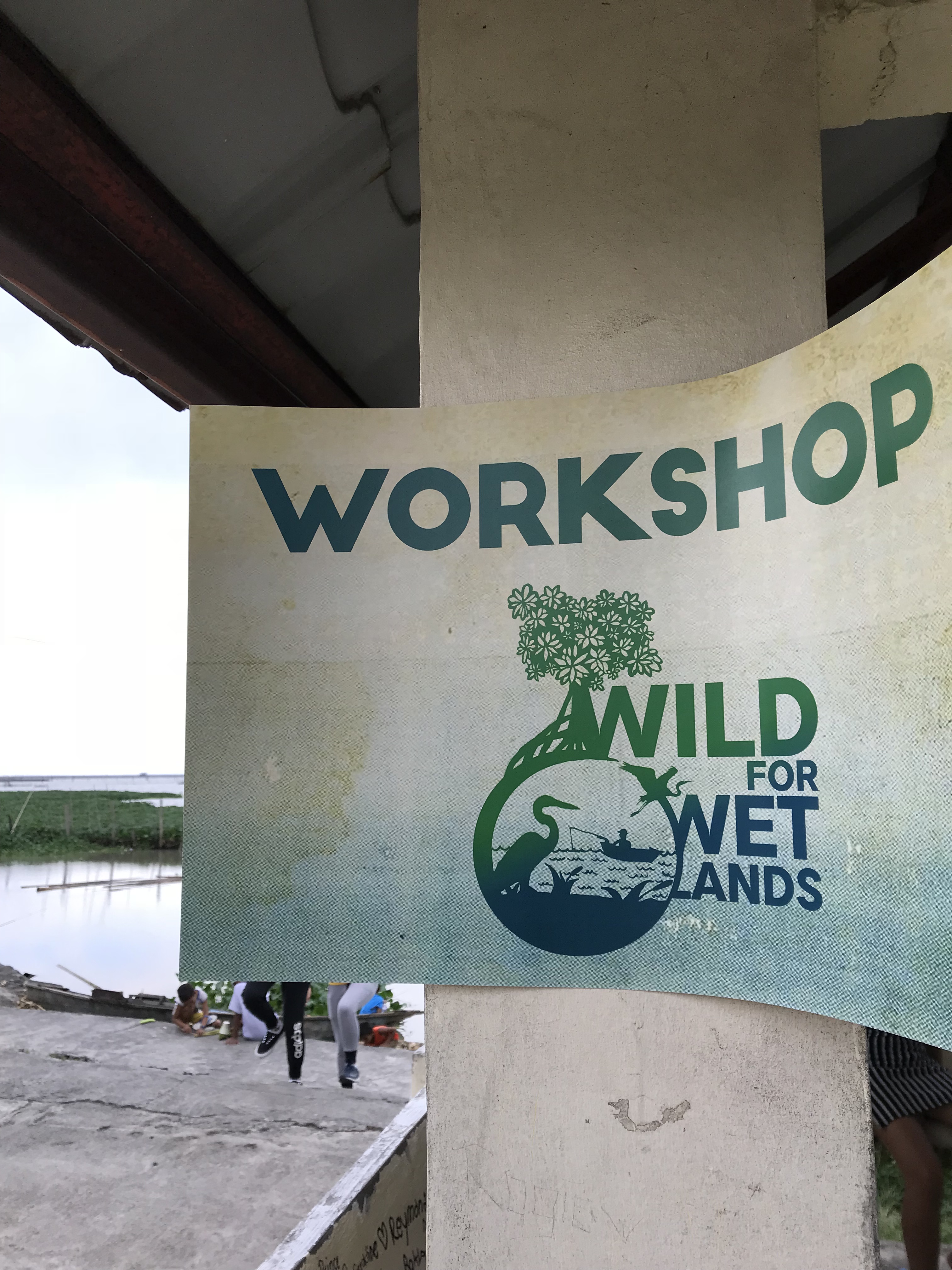 Wild for Wetlands is an initiative spearheaded by Earth Island Institute, Save Freedom Island Movement, Save Laguna Lake Movement and Nilad, to commemorate International Wetlands Day.

The park, in Google maps, looks very interesting, but on the ground, it doesn’t quite live up to its promise as a park. It wasn’t easy to locate on the ground, no signs anywhere to point to it. It is also part of a barangay administration complex so we had to wade through a whole community before the park appeared. It was a small park, planted with non-native trees, with gazebos all around for people to sit in for picnics by the lake.

The park is very much in use by the people. On the lakeshore, which is unfortunately completely cemented over, children played while the men fished for dinner. Caught were tilapia, mudfish, carp and a fish that looked like a catfish had a love-affair with a shark. Laid out to dry on the cement were stems of the water hyacinth. I heard they were to be sold to the Villar Foundation for their projects. The shore was almost completely choked with the plant. 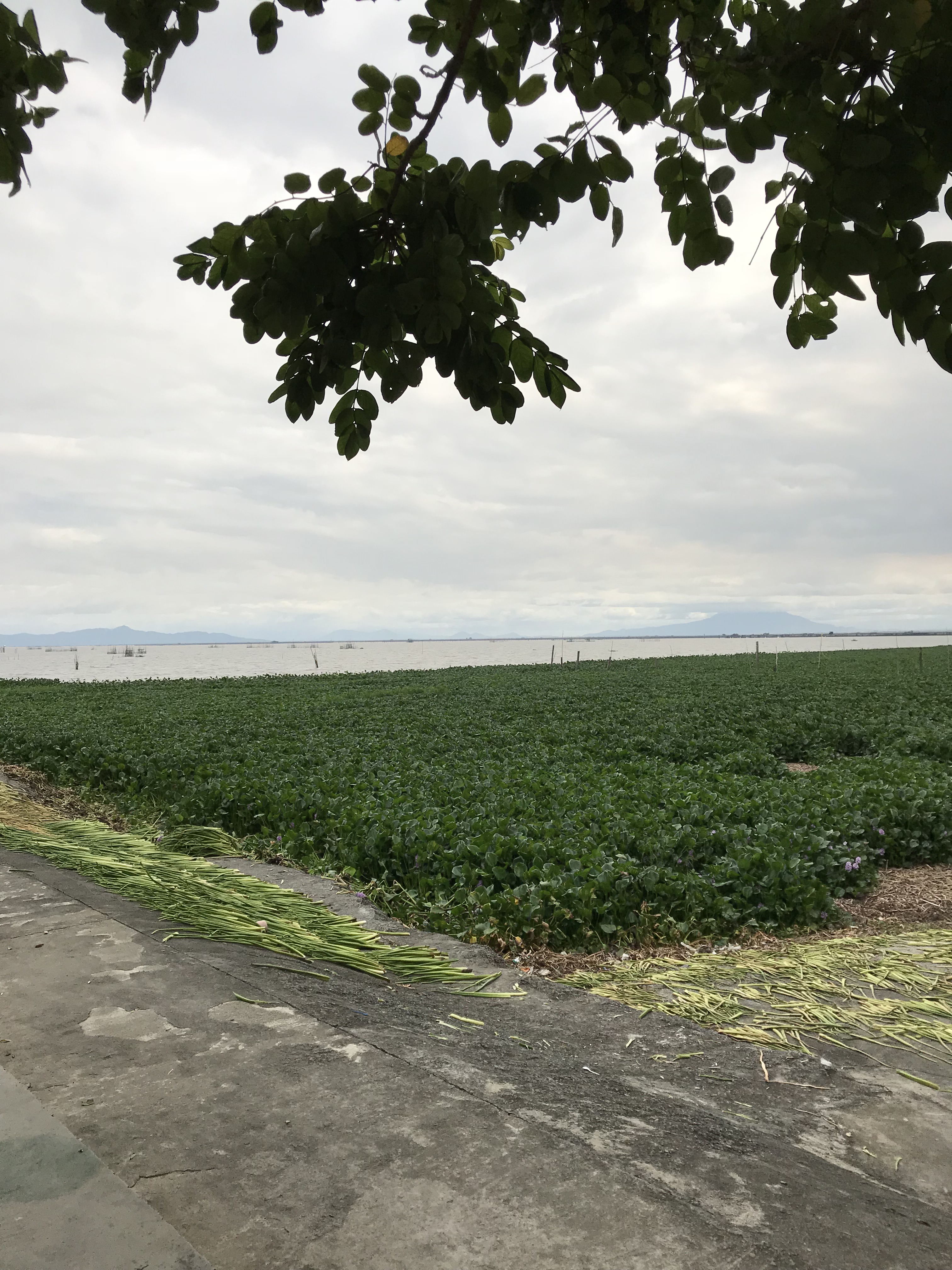 Grade 12 students from the Roosevelt College arrived early so I took them to the park edge facing the lake and showed them the birds. Gayatri Hasan helped me very much, showing the birds on the Kennedy book to them and asking the questions the students wouldn’t ask to further the discussion. After the students, came the little local boys who were thrilled to have a much closer view of the birds they saw daily. 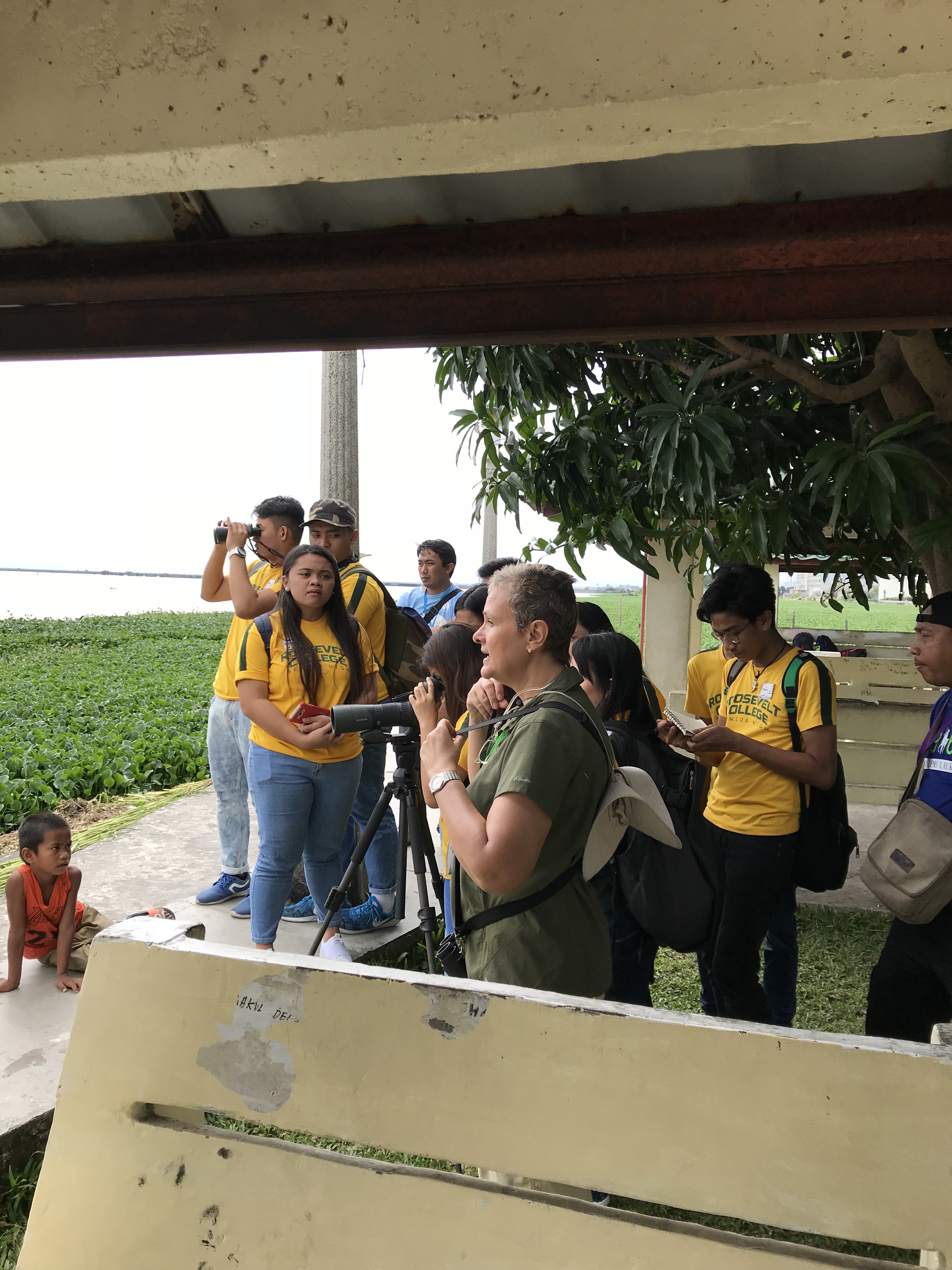 While there weren’t too many birds, the species count was relatively high. 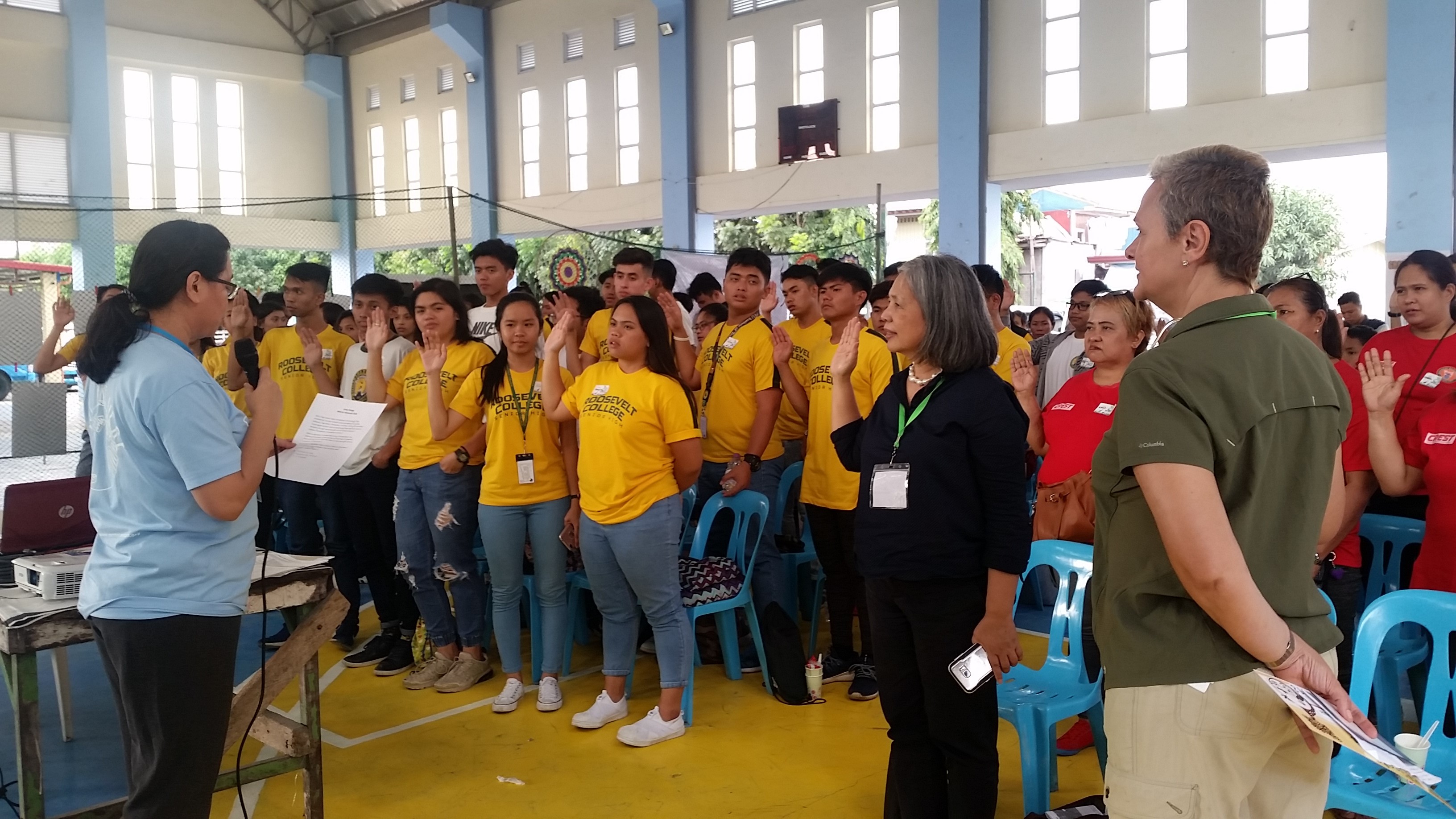 The talks in the afternoon were quite informative. I spoke about the topic, “Birds as indicators of a wetland’s health” concluding that birds can serve as very useful indicators to both the fields of environmental science and to human health.

Next speaker was Mong Palatino of Nilad who spoke about the importance of green spaces in Metro Manila. His statistics of the number of trees and total area of PUBLIC green spaces is alarming. Because of Luneta and Arroceros, it seems Manila at 4% actually has more green space than Makati at 1%!

Next speaker was Fernando Hicap of Pamalakaya. He spoke of the history of government policies that affected the lake. The lake was once brackish because the tidal bore from the Pasig would reach into it and clear the waters. That no longer happens after a certain project of the Pasig River Rehabilitation blocked the flow. The lake is now a turbid, dirty and FRESH-water lake. As a consequence, the lake can only support fresh water fish like mudfish, carp and tilapia. This has wreaked havoc to the approximately 18 native fish species, 3 of which are endemic to the Philippines. At the area of Sucat, the lake is almost completely covered with fishpens.

The lake is under threat from the proposed Laguna Lakeshore Expressway Dike, an expressway that will start from the coastal area of Laguna de Bay from Taguig in Metro Manila to Calamba and Los Baños in Laguna. While the project will certainly speed up traffic flow between the southern part of Metro Manila and Laguna, the local communities fear the loss of their connection with the lake.

The last speaker was Annadel Cabanban of Wetlands International who spoke of wetlands in general and the challenges they face. When asked if Laguna de Bay could possibly be declared a Ramsar site, she said not at its current state.

The saddest statement is that while the local groups spoke of their hopes to restore the lake to its former glory, it does not occur to them that their tiniest daily actions are also the reason for the lake’s sad state. After the talks, George, Manette and I walked over to the gazebo that juts out from the park to have a closer look at the birds. We were treated to a yellow bittern feeding among the choking water hyacinths, totally oblivious to our presence just four feet above it. And right next to the bittern floated a water bottle, its lavender cap distinguishing it as the one being distributed at the venue of the talks. Sigh… 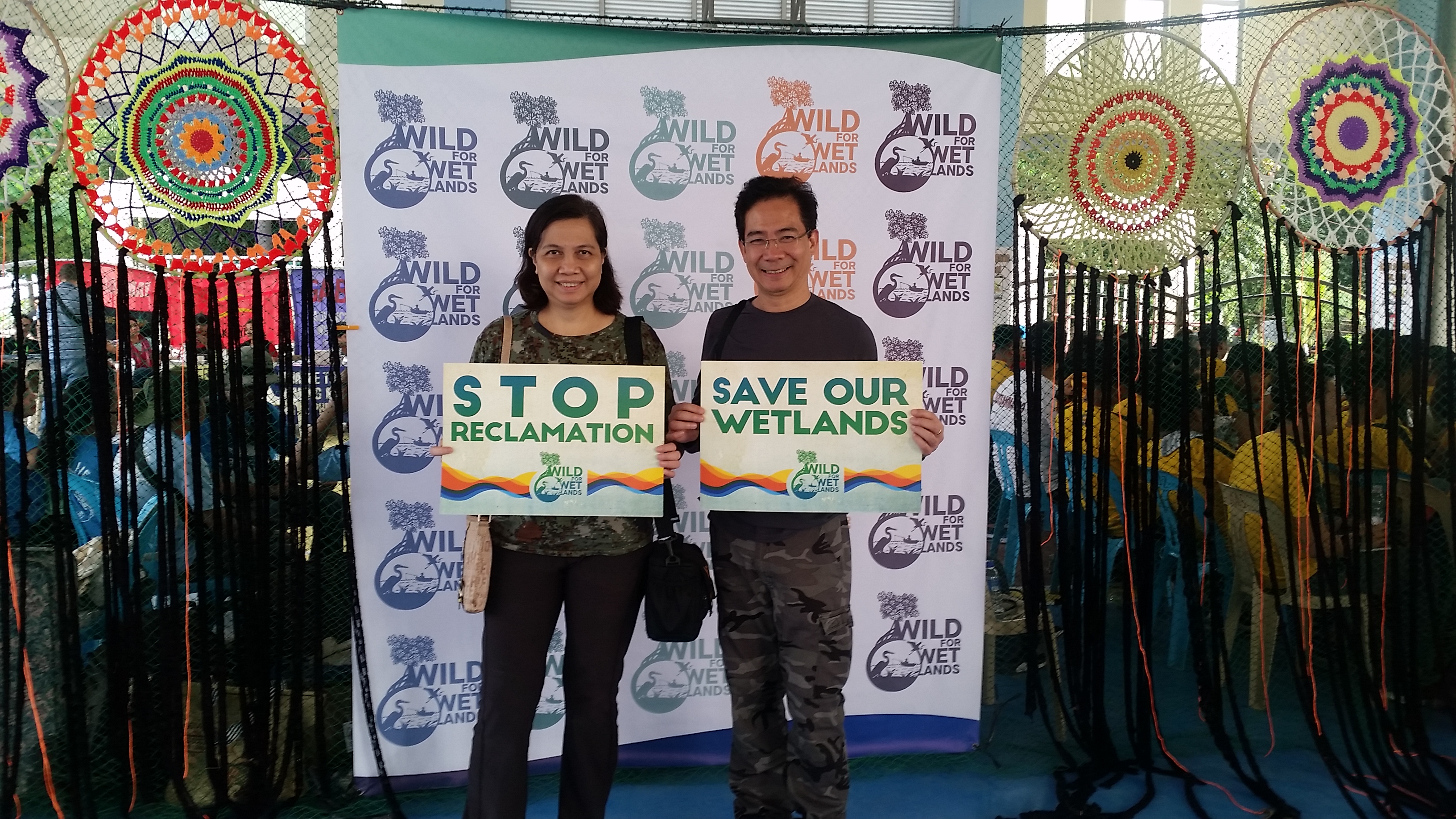