Text by Gwen So
Photos by Gwen So, Mary June Bugante, and Jon Villasper

On August 1,Willem sent out an email for a club trip in Masungi Karst located in the mountainous area of Baras, Rizal, mentioning three areas to check out: a newly reforested trail, the clubhouse grounds, and the karst (limestone terrain). Still on a high from the Caylabne outing, I immediately signed up and didn’t really care for the details.  However, the night before the trip, I looked up Masungi and the images shocked me – rope bridges, a web, a cave, rocky terrain, steep inclines… whaa? I nervously texted MJ Bugante vehement there’s NO WAY I’m going on those obstacle courses.  She laughed and assured me we’re going somewhere akin to Mount Palay Palay and is certain some of our companions will be unable to make the arduous climb in the adventurous section either.  With my fears thus assuaged, I slept well.

On Monday, August 27, 2018, we congregated at Burger King in MacArthur Highway.  Yours truly was the first to arrive at 4:20am, 10 minutes earlier than scheduled. The goal is to reach our destination by 5:30 am.  The plan was to split the group into two. Group A will do an ocular of the new Legacy Trail (the reforested area) and Group B will bird around the clubhouse. Later, at no extra cost, those who would like to try the original trail, the Discovery Karst, could have a go at it.

The car ride to Masungi Georeserve was uneventful.  Our group was smaller in size as some weren’t able to make it, so when we had our orientation with the guide, the unanimous decision was for everyone to do both the Legacy and Discovery trails. I should have seen the signs.  First, the guide looked stunned at our announcement.  Next, he insisted we all had to get the walking sticks they provided.  I didn’t need one in Mt Palay Palay and had initially refused.  We began our ascent. 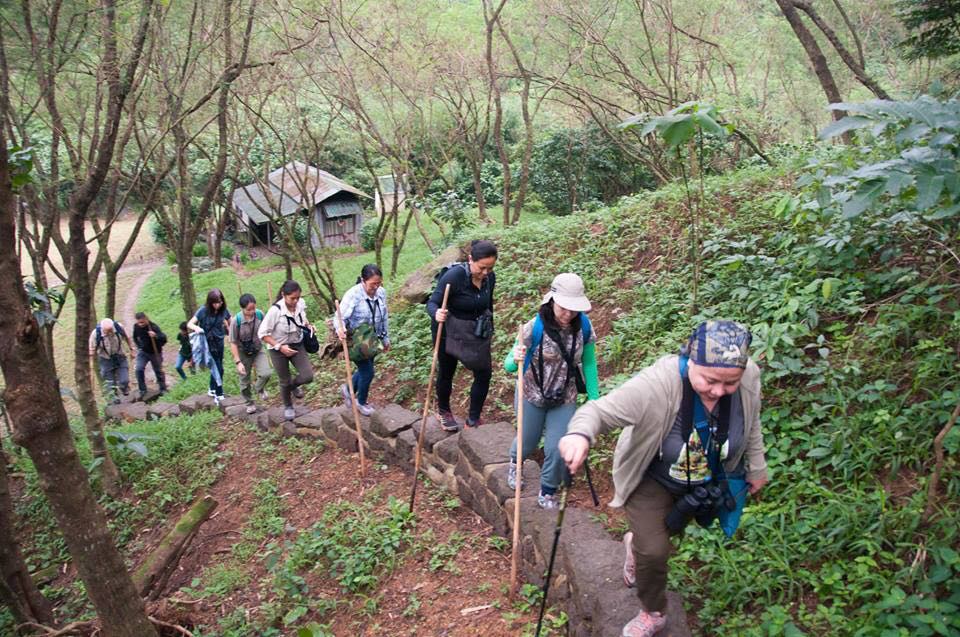 Barely 20 paces into it, I caught up with MJ and we were both bug-eyed, panting like dogs.  Mt. Palay Palay this is NOT!  I hardly broke out in a sweat the entire morning I trekked MPP but now my legs hurt and I was perspiring already … and we just started!  “I didn’t realize it would be this steep!” exclaimed MJ.  The forest was quiet, not much bird sounds, and up to about a third of the way she and I gave up.  Jon V had a cold and decided to rest with us while the others forged on. 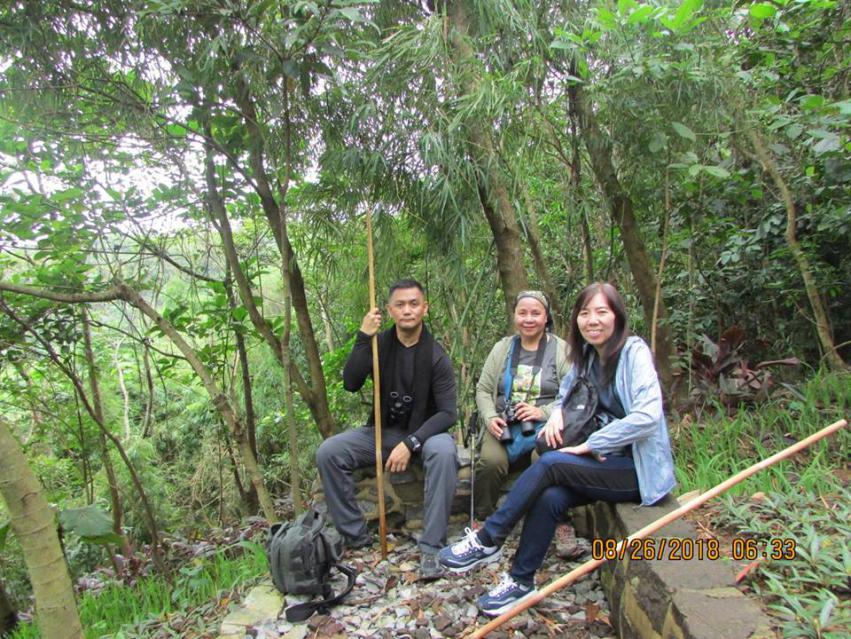 We birded in the vicinity but no luck so our guide took us to a nearby spot they call “The Orchard.”  It just wasn’t a busy morning but the highlight was when Jon spotted a Scale-feathered Malkoha hopscotching on the ground until it disappeared into the foliage.

The group that proceeded encountered more steep inclines and according to Doc Lolet they didn’t go to the peak anymore. There were hardly any birds too.  When the rest of the team came back, we made our descent (which was just as tiring), had a much needed snack, then on to the Discovery Trail.  We were assured we could skip the attractions if we didn’t feel like doing them.  First stop was at this reception area (Silungan) where we had to have an orientation and sign waivers (uh-oh). 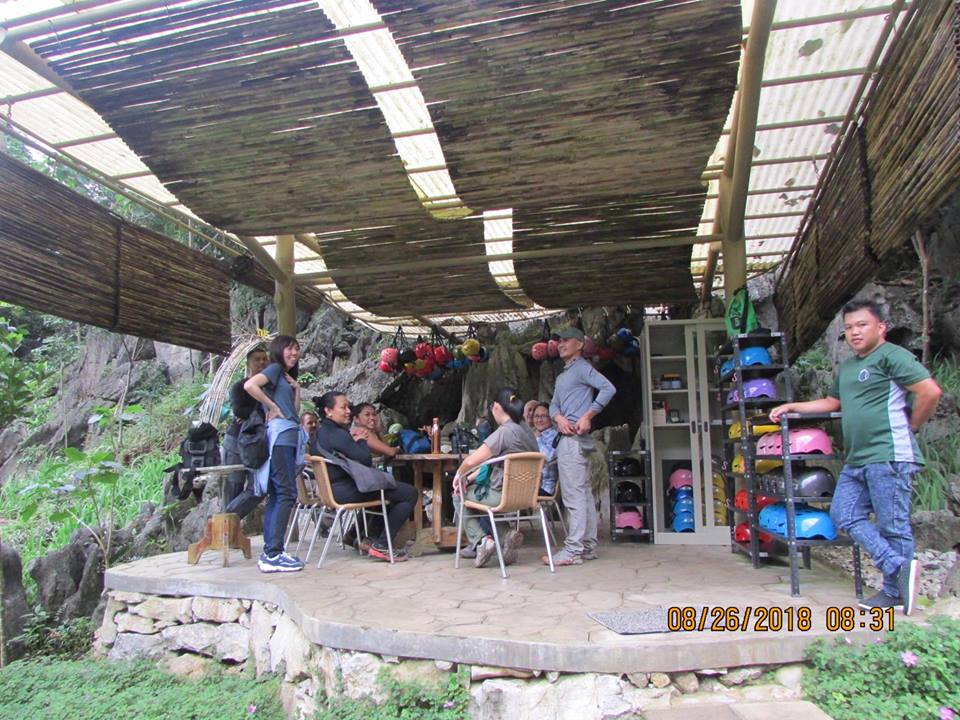 The guide had just uttered a few words of greetings when there was a sudden commotion.

Screeching sounds of chairs scraping cement were heard as people bolted out of their seats scrambling to get out into open air because a Tarictic flew overhead.  After we oohed and aahed, I heard Doc Lolet mutter a sheepish apology for the interruption, hehe.  We were asked to wear helmets and I thought to myself, hmm, that’s kind of going overboard, isn’t it?  I saw some of the workers react in amusement that none of us would take the bright helmets and instead called dibs on the black and gray ones. I was looking for the walking sticks but was told they won’t help because we were traversing big spiky rocks.  (Another uh-oh. )

First rope task was a short rope climb. I’ve never done this before so I opted to do it rather than walk up an easy path behind the wall. Let me just mention now that I have vertigo and  knee problems but hey, this is birdwatching so there shouldn’t be any problem at all. Well, the Discovery Trail wasn’t a walk in the park.  To me it was already hardcore climbing and I just happen to be afraid of heights. I heaved a sigh of relief when we reached the floating spider web platform (Sapot) because it meant a pit stop where we can catch our breath and have fun taking photos. 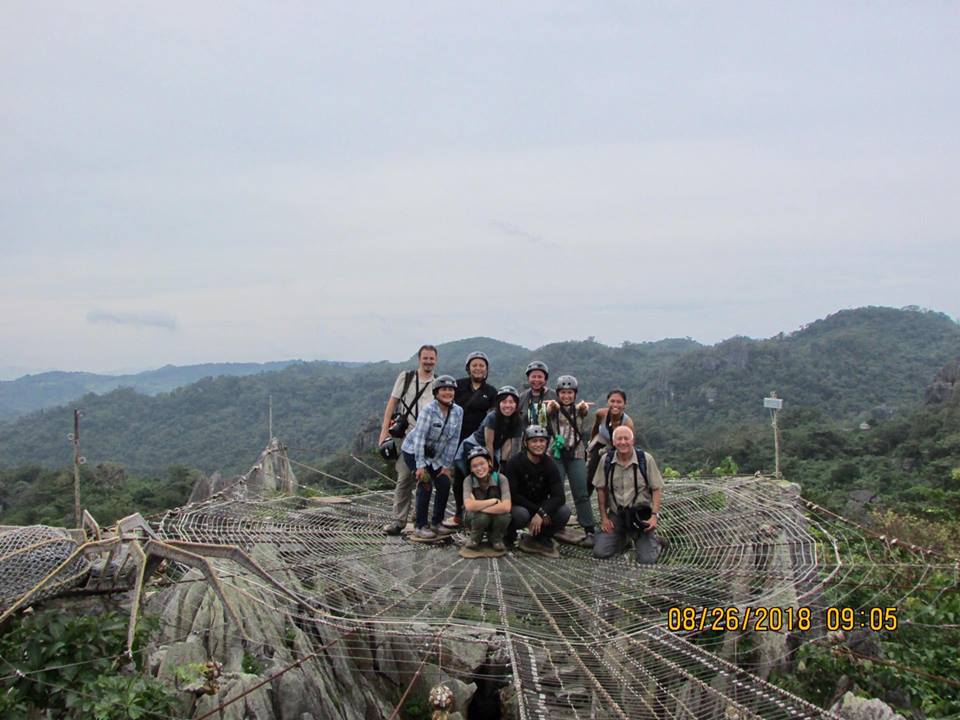 To get off the spider web, we had to cross a narrow shaky wooden slat bridge and our guide Mark said there really is no turning back from this 3 to 4 hour trek.  No choice. Gotta keep going.  Midway, the ladies in front of me shouted “wow, there, so many of them!” Yes! Finally we get to see birds … NOT.  Instead, we saw lot of pretty butterflies flitting from one flower to another and paused to enjoy the scene.

In another self-imposed rest station, this is what happens when frustration sets in haha. 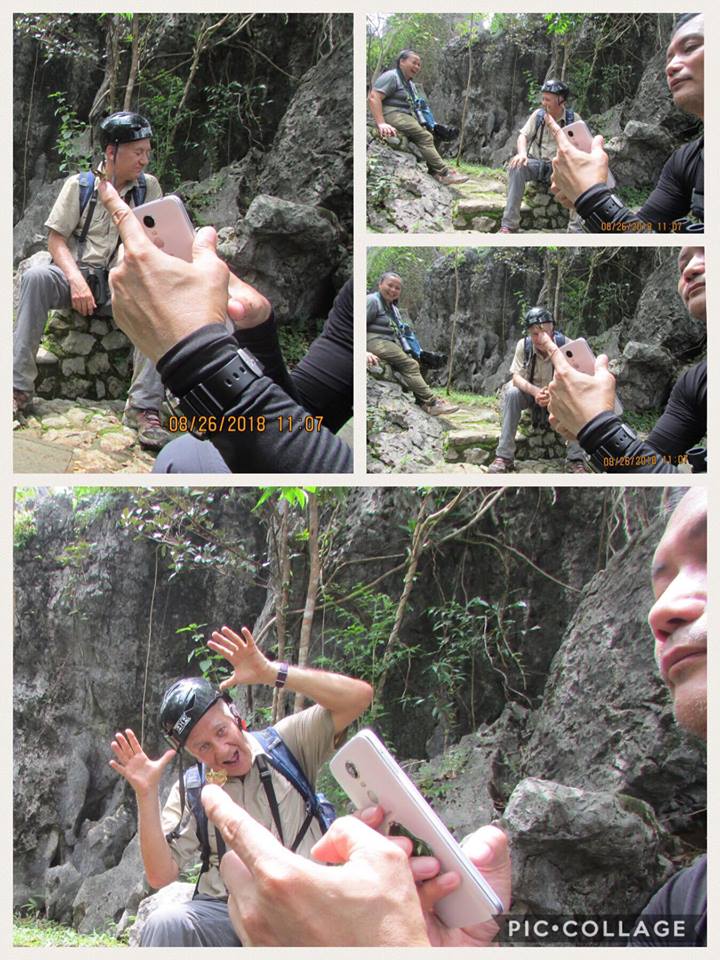 More up and down trekking in an overgrown rock garden ensued until we reached a cave  (Yungib ni Ruben). Fear gripped me but thankfully it was a small one. Willem asked us to go natural and not turn on the cellphone flashlight to maximize the experience. It was from hereon after that I understood why we needed protective headgear. In some areas, we had to crouch and squeeze between low and narrow crevices. 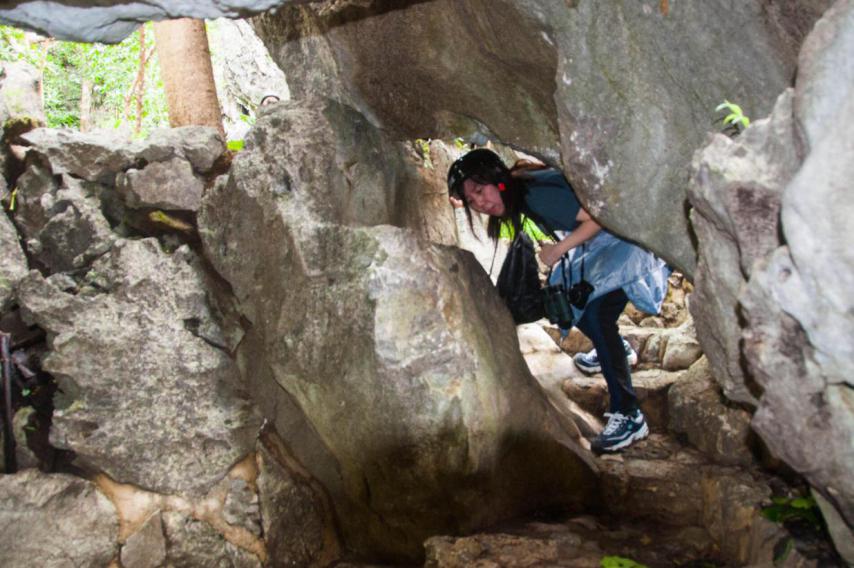 Next was to make our way atop Tatay, the tallest peak composed of rocks piled on top of one another. 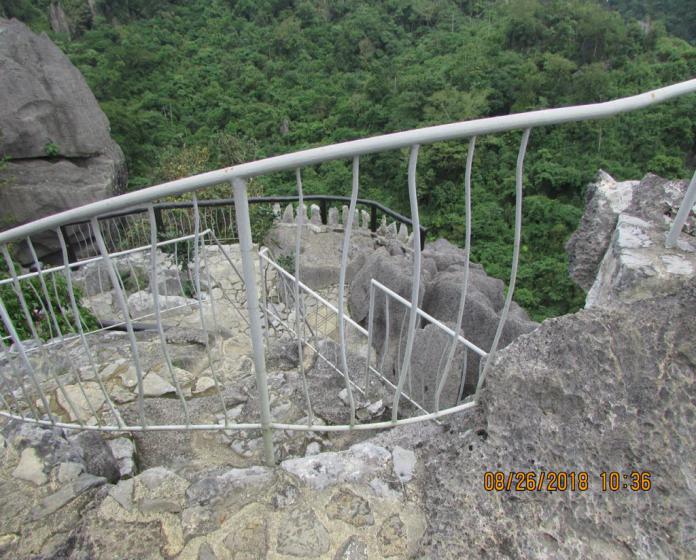 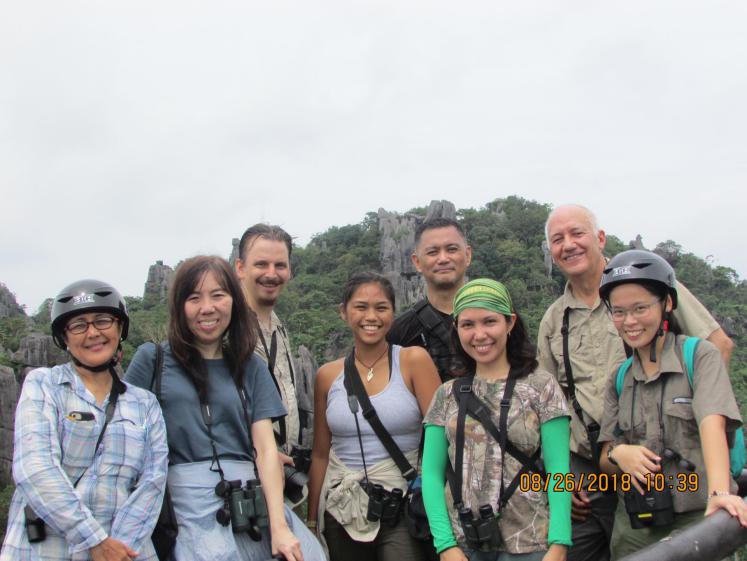 From here we could see the other peak, Nanay, featuring limestone rocks interconnected by bridges.  We opted not to go there anymore. 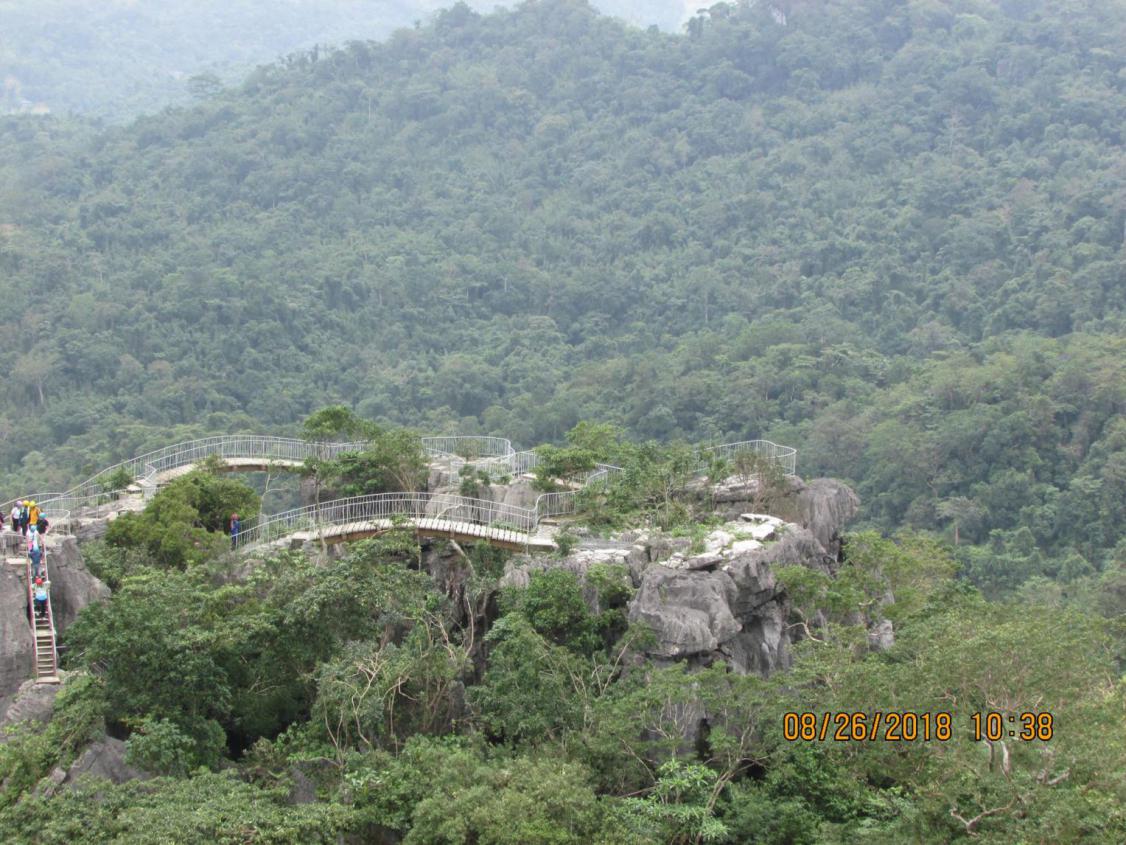 Breaktime! Healthy sandwiches and drinks for everyone prepared by the staff. Outside food is strictly prohibited and there is a fine for littering. 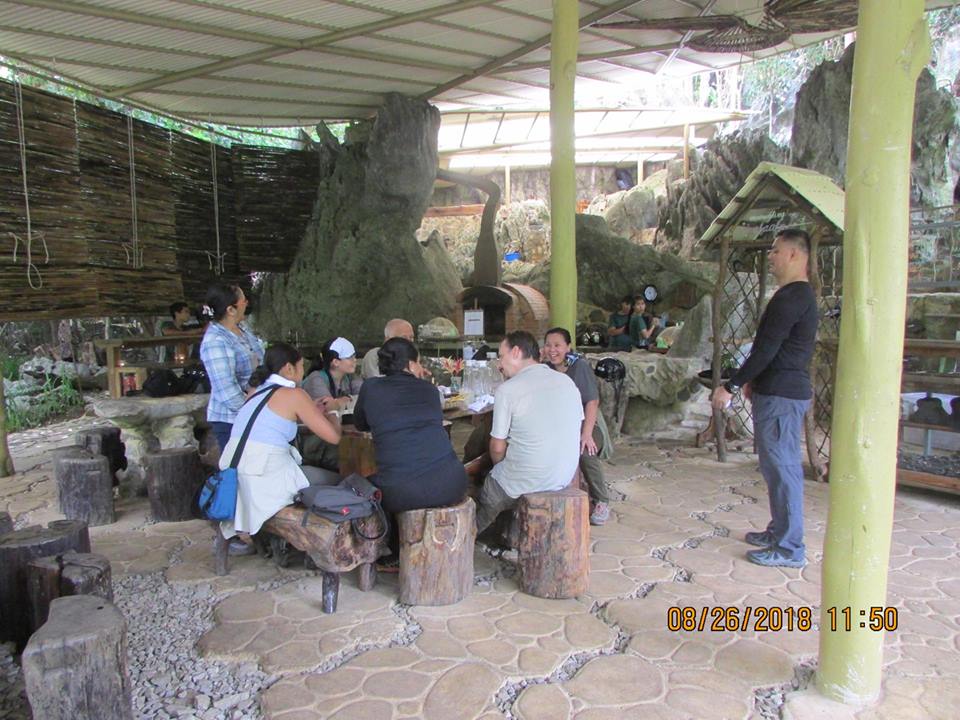 One of the biggest attractions here is Duyan, the giant hammock. MJ and I passed on this preferring to rest on the hammock chairs instead.

Now just about half dead, I realized this is no longer a birding trip.  I saw zilch of our feathered friends not even an ETS!  Back in the Legacy Trail I saw a Pygmy Woodpecker, a Philippine Bulbul and the tail of the foraging Malkoha… that’s it.

Another shaky rope bridge, SAWA, or snake.  For a vertigo sufferer like me, the key is to look straight and not look down but the swaying wasn’t helping so I decided to bounce with the bridge and pretend I was dancing… hey, anything to make sure I don’t embarrass myself  or pass out in the presence of the great Christian, the Club Prez and Vice Prez! I might as well enjoy this extreme sport because IT WILL NEVER HAPPEN AGAIN, no sirreee! 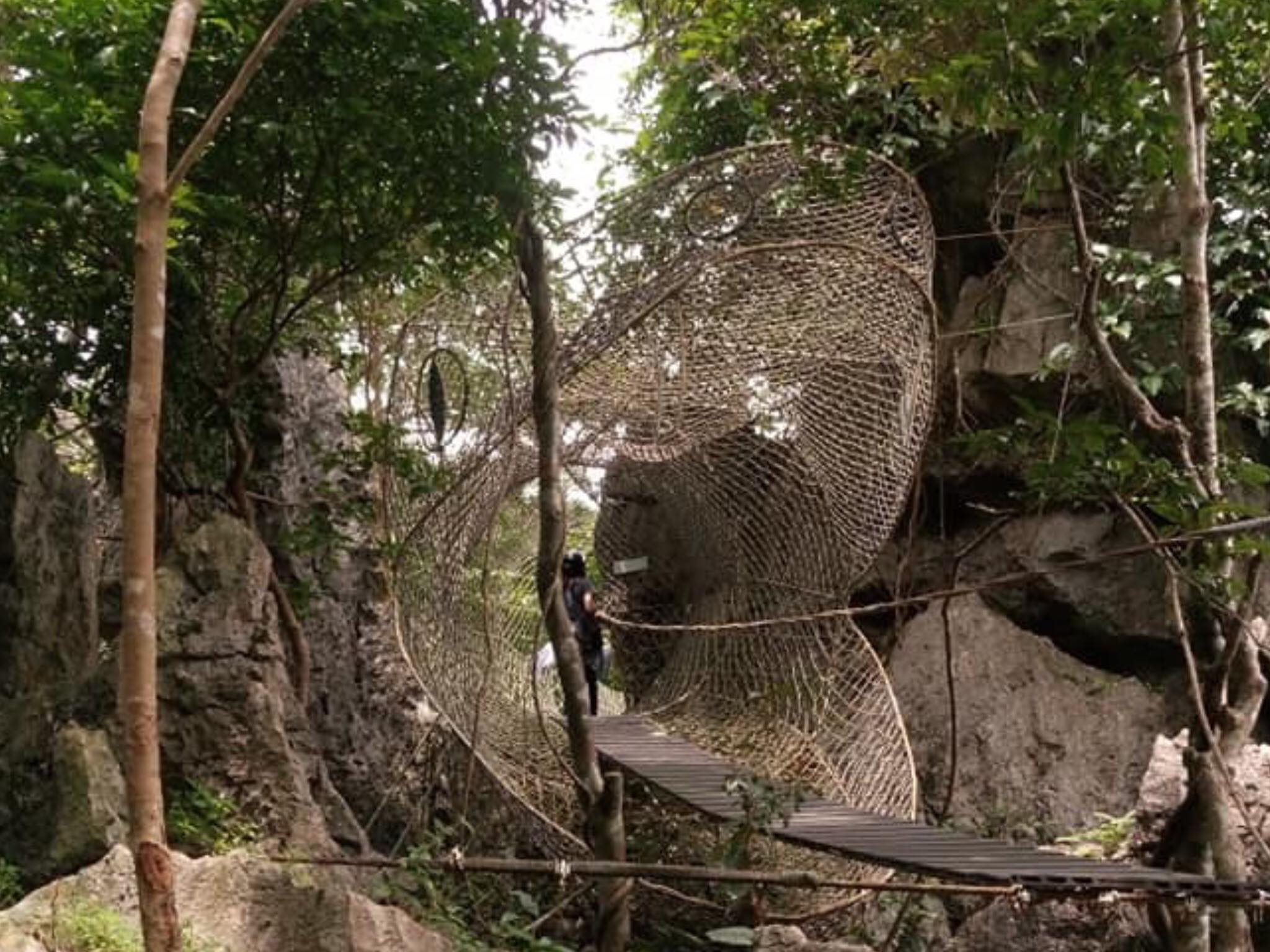 I think by this time I was already having an out-of-body experience.  The way to the car was a looong ways off. The photo below shows us leaving the parking lot to go the Discovery Trail and this by itself is already a walkathon. As we made our way up some stairs towards the exit, I asked my companions to be quiet so they can hear my knees make castanet sounds. 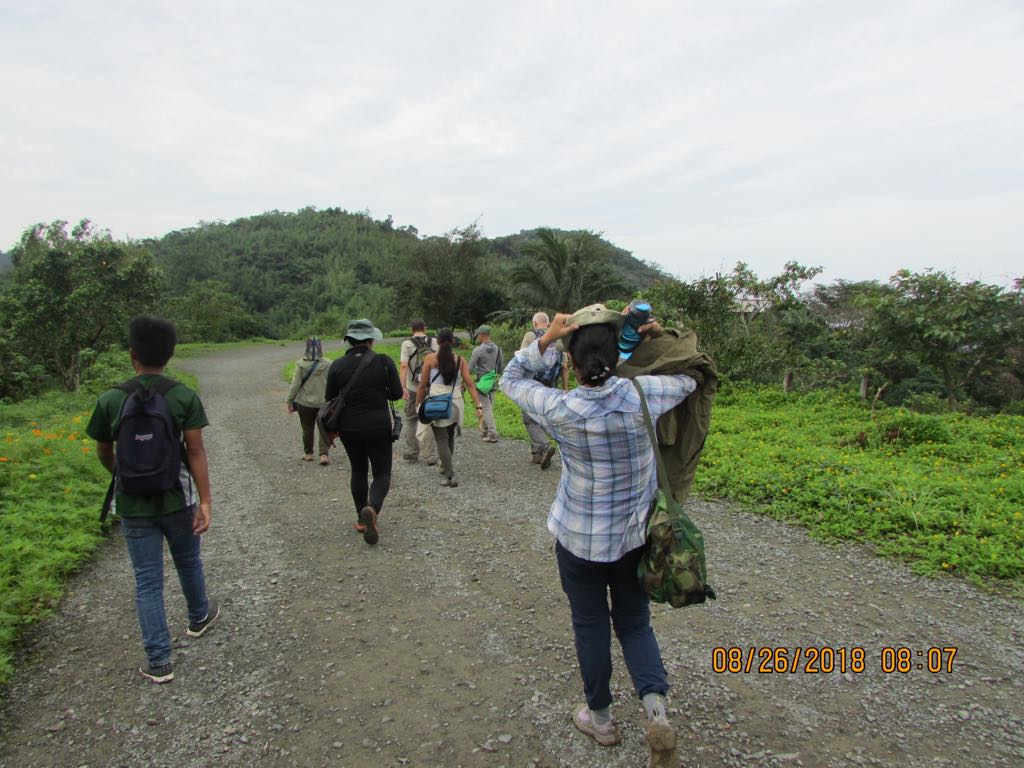 Oh, by the way, this rock formation is where the logo came from.  Nice!

I am still afraid of heights, have vertigo and bad knees…but I SURVIVED Masungi and I claim bragging rights!  I am the envy of my friends hah! It didn’t occur to me that birdwatching also entailed me going out of my comfort zone doing things I’d never do… not even for a man I really like, hello.  Here’s to more adventures with the Wild Bird Club of the Philippines!