The Bird Traps on Mount Polis

Hunting is illegal in the Philippines. Yet the practice hunting a few birds for the cooking pot is common and prevalent in this poor and largely rural country. WBCP Founding Member Kitty Arce takes a long, hard look at the illegal practice of hunting birds for food and reexamines her beliefs about hunting.

My birding buddy Mark and I look forward to birding trips as a fun and welcome break squeezed in between our busy work schedules. I was hoping to one day write about the fun of going on spur of the moment 48-hour birding weekends. Or about the thrill of long weekends spent discovering new birding spots. Instead I am writing a reflection on hunting.

Mark and I were in Mt. Polis for birdwatching. While we were walking along a trail, we came across several bird traps. At first, I did not understand what they were. Mark explained to me how they work. He said, it is the perfect trap. The bird will come flying up to the gap from downhill and then boom – it would be caught in the net instead of what the bird thought was free open space. We saw 3 of these traps.  After a few minutes, I forgot about the traps. I guess I thought they can’t be that effective.

The following evening, we went back to the same trail to look for owls and other wildlife. We went past the three traps and breathed a sigh of relief when we found nothing caught. After an hour of looking for owls, we returned along the path. At the second trap we found a bird and a bat caught in it. The bat was dead, but the bird was still alive. It was a Philippine Scops Owl. I felt so bad for this beautiful creature caught in this ugly but effective trap. It was thoroughly tangled in the mesh and clearly exhausted. Mark is a field ecologist and in a few minutes had removed the bird and released it. It flew to a nearby branch, looking dazed and confused. Then it flew off briefly, returned and perched nearby. It looked more itself this time– regal, wild – and gave us a final look before disappearing into the night. 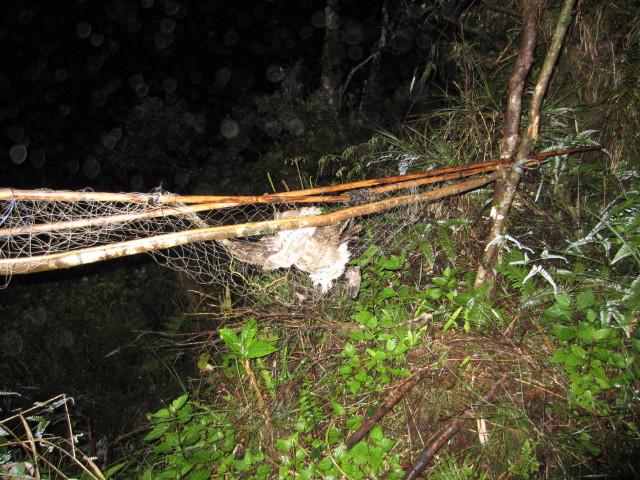 This incident got me to thinking about how highly effective these traps are! How many wildlife are caught in this trap each week? In a month? In the four days we were in Mt. Polis we saw many individuals on the roads and trails with air guns for hunting. The people we asked said that they hunt for food, usually medium sized birds, and that this is the way of life. I reflected on the situation and asked myself – is this acceptable? Local people probably do not even know which is species is threatened and which is not. Plus food is abundant in Ifugao and Mountain provinces. Vegetables are planted, growing, and getting harvested everywhere. Chickens and other domestic livestock are abundant.

I always thought that hunting for food is acceptable for the simple reason that people need sustenance.  For some people, hunting is simply the way of life. Hunt what you can eat, if you can’t eat it, don’t kill it. That belief seemed very reasonable to me.

Hunting for recreation is another story. When recent reports about hunting for recreation appeared in the papers and on Facebook, I was horrified. Who could eat more than a dozen endangered Philippine Ducks? And how could they even have to gall to post their pictures with their smug smiles? I’m referring here to the Philippine National Shooting Team and the infamous Chavit Singson and daughter hunting-spree! Who in the world could eat Zebra doves, Yellow-vented bulbuls, etc? Those hunters just seemed to enjoy the kill, showcasing their guns, and showing their superiority over helpless little birds!

I am no vegetarian. I eat meat. Yes, the food I eat is slaughtered. They probably occupy space which used to be forested. But my point is this: cows, chickens, and pigs are domestic species that were bred for people to eat. I know that there are some people who think that I should just shut up about hunting for recreation because I eat meat and I do not hunt for my own food. But I go back to my question again – do I eat wildlife? No.

Let’s also get a couple of things straight: According to Republic Act 9147: The Philippine Wildlife Conservation Act – hunting, possession, inflicting injury and killing of wildlife is illegal and may be punishable up to 12 years of imprisonment and up to 1 million pesos fine. And that collection of wildlife (except threatened species) by indigenous peoples is allowed for traditional use and not for trade.

For now, habitat loss rather than hunting may be the biggest threat to the unique birds and animals in the central mountain ranges of Luzon. At Mt Polis, WBCP members have observed notable changes in the past few years, with more settlers moving in along the roads, new structures, expansion of quarries, and continuing clearance of the cloud forest. A few years ago, the forest trail behind the statue of Ave Maria at the border of Ifugao and Mountain Provinces supported a few seasonal huts and led to a small clearing. Today, along the same trail there are more huts, new and larger cleared areas. The forest is being gradually taken over by tended rows of cabbage and lettuce. Google Earth satellite imagery also shows new clearings. Perhaps the biggest irony at this site is an old project sign nearby saying “Bayo Cloud Forest Conservation Area”. The sign stands in a cultivated field next to the road.

Despite the greater threat of habitat loss, hunting may fast become a key threat for some species. This is especially true for the larger birds which are targeted such as the Flame-breasted Fruit-Dove, a bird unique to the mountain ranges of Luzon. Wildlife have almost no chance of survival with a combined threat of habitat loss and hunting. They already lack areas for food, shelter, and protection. When their numbers are further decimated by hunting, they cannot easily recover since they do not reproduce quickly.

Seeing so much hunting made me wonder what can be done. Would a campaign against hunting help lead people to understand more about the importance of the eco-system? Or would we be affecting the rights of Ifugao and Mountain Province communities if we try to stop them? How would we judge between recreation, a traditional way of life, and hunting for food?

I no longer think that  hunting for food as way of life is acceptable. I think that for people who have access to vegetables and domestic livestock should not hunt wildlife for food. The combined threat of hunting and habitat loss is just too much for some species to cope with and will ultimately bring them to extinction.

Later on the trip, we were having snacks at a local coffee shop and I overheard our driver talking to the shop owner about bird watching and hunting. They started talking about the possibility of protecting birds, and owner said “you mean like a bird protection ordinance?” My heart smiled. There is hope.

What are your views on hunting?