Have you participated in the Asian Waterbird Census (AWC)? Linda Gocon shares her adventure counting waders in Balanga, Bataan in this year’s AWC.

Text and photos by Linda Gocon

Who would have thought that counting waterbirds could be such an adventure?  Up front it sounds a bit boring.  You picture yourself standing around for hours in the hot sun trying to ID (identify) indistinguishable shorebirds and waders that seem miles away as you steadily wilt in the blazing heat of the tropics and go blind from constant gazing into your binoculars and scope.  But in reality, it’s a lot of fun and can be filled with adventure, like my experience last January 21st in Balanga, Bataan.

Arne Jensen had advised the WBCP that for this year’s Asian Waterbird Census (AWC) in Balanga we should survey a new area across the Talisay River, on the other side of Barangay Tortugas where he had spotted scores of birds during his aerial survey awhile back.  Sensing that this had promise of adventure, I immediately volunteered along with Maithri Jansz and Jops Josef.  None of us were able to attend Friday night’s organizational meeting so we were dependent on our trusty guides, the barangay officials of Tortugas.

Before the crack of dawn, we arrived at the windy and chilly Balanga Nature and Wetland Park along with others from the club, namely the intrepid team of Karen Ochavo and Tinggay Cinco who were assigned to Tortugas.  My team with Jops and Maithri were told by the barangay officials we would be taken by boat over to the new site but since our boatman thought it best to wait until the tide went out, we enjoyed the spectacle of seeing hundreds, possibly a thousand, of various kinds of egrets fly from their roosting sites, cross the river and head off in the direction of Mt. Samat.  And then the waders arrived in swarms, like waves billowing back and forth over the sea, eventually landing softly in the shallow waters, right at the mouth of the river.

As the sun began peeping up over the horizon, our guides ushered us to our tiny boat and we took off across the river thinking they would take us south along the coast.  Instead, they landed on the opposite bank of the Talisay River in Balut, Pilar, Bataan, a mere ten minute boat ride.  Hiding our disappointment, we climbed up bamboo bridges to get to the road behind, which was an adventure in itself.

We were then led to a group of fishponds that didn’t look to have a single bird in them besides a lone egret.  But on further examination, we spied a group of four Common Moorhens on the back right side of one of the ponds and four others scattered around with a group of 30 Little Grebes at the far back.  I also managed to capture a Eurasian Coot in my scope.  And then we noticed a group of 12 Black-crowned Night Herons roosting in the trees. Other than a Wood Sandpiper, a couple of Common Sandpipers, and a Common Kingfisher we asked if we could get back to the river delta and head south in hopes of finding Arne’s birds.  Since it was so shallow, we opted to walk out.  Poor Maithri cut her foot on the stone steps leading down to the water but thankfully it didn’t bleed, due in part I suppose from all the mud caked inside.  She wasn’t in any pain and being the trooper that she is, she stuck it out with us.  With the mud oozing around our feet and sucking us down, we had a hard time going and at one point I shouted to Jops ahead of me if it was really worth it.  He encouragingly yelled back that the mud was getting firmer and shallower so we trudged on and managed to arrive at the mudflats without disgracing ourselves. 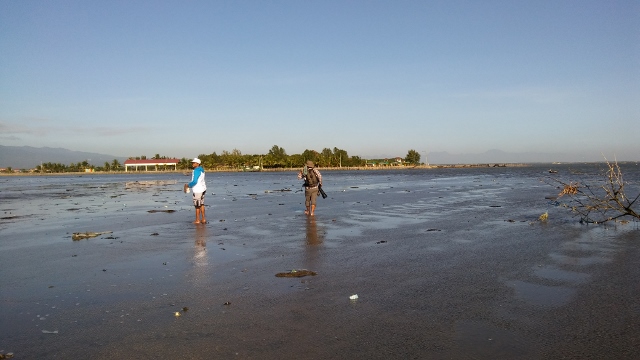 We were now where all the waders were.  After some consulting with Karen and Tinggay, we got the OK to count the birds on the south side of the mudflats which were difficult to ID from their vantage point in Tortugas.  Scores of Pacific Golden Plovers, Marsh Sandpipers, Common Greenshanks, Redshanks, Kentish Plovers, and Little Ringed Plovers spread out over the mudflats, it was a bird convention!  We then began studying a group of terns with yellow bills, black napes and white foreheads. Great Crested Terns!  A lifer for me, and I think for Maithri as well. 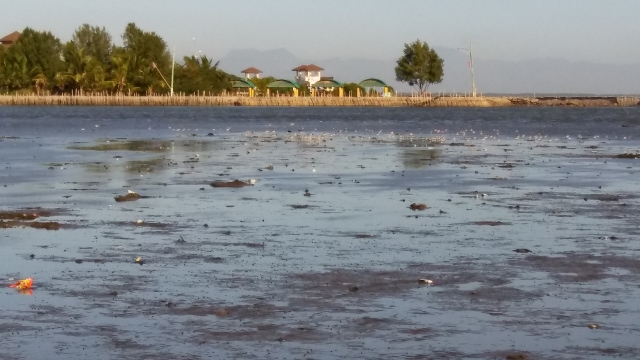 Looking further south, we couldn’t see any action bird-wise and noticing that Karen’s group had disappeared, we decided to head back to Tortugas.  Upon landing at the Wetland Park, Jops immediately spotted a Lesser Sand Plover on the beach.   But now that we were out of the water, the deep cut in Maithri’s foot began causing her grief so the city official with us called the medics who promptly responded and treated her with what was probably the best first aid she has ever received.  Another adventure!

While we didn’t have great numbers from the new site, we at least added to the information base and hopefully before next year’s AWC someone else can go surveying the area to find Arne’s waders, and have an adventure themselves!