One of the few RAMSAR sites in the country, and an incredibly important breeding site for several sea bird species, the Tubbataha Reefs Natural Park has much more to offer than only looking at fish under the water. Luckily, the Philippine Government had realized this a long time ago, and the Tubbataha Management Office (TMO), together with the Philippine Navy, the Coast Guard and local government of Cagayancillo, protects the Tubbataha Reefs Natural Park and it is one of the most active protected area management in the country, both with regards to enforcement and monitoring as well as studying what needs to be done before implementing management policy changes. This includes not only regarding the subterranean marine part of the reefs and atolls, but also concerning the sea bird populations.

As they sought the best expert advice for this, they enlisted our own Founding Member, Records Committee chair, and anti-mangrove-planting-on-mudflats-advocate Arne Jensen to lead these studies. Each year, going back to 2004, he goes out to the few small islets in the reef and assists the TMO to count the birds there and keep track of population and habitat changes. Luckily, he does not do this alone, but has several others to help him. This year I was lucky enough to get a ‘golden ticket’ to take part in the annual bird count and did not hesitate when asked to join the trip. We spent a week counting over thirty thousand birds of more than 20 species, the vast majority of these belonging to only six seabird species which breed on just two tiny islet of less than 2 hectares. Incidentally, all of these seabirds were lifers for me.

Tubbataha is only accessible about three months a year. The rest of the year the weather does not allow you to go there safely and the park is left alone. During the short window to get there, you are not allowed to go ashore, save for the sandbank where the ranger’s station is built. The two main bird breeding grounds, Bird Islet and South Islet, are off limits for all except for the Tubbataha Park Rangers… and the volunteer bird counters once a year. 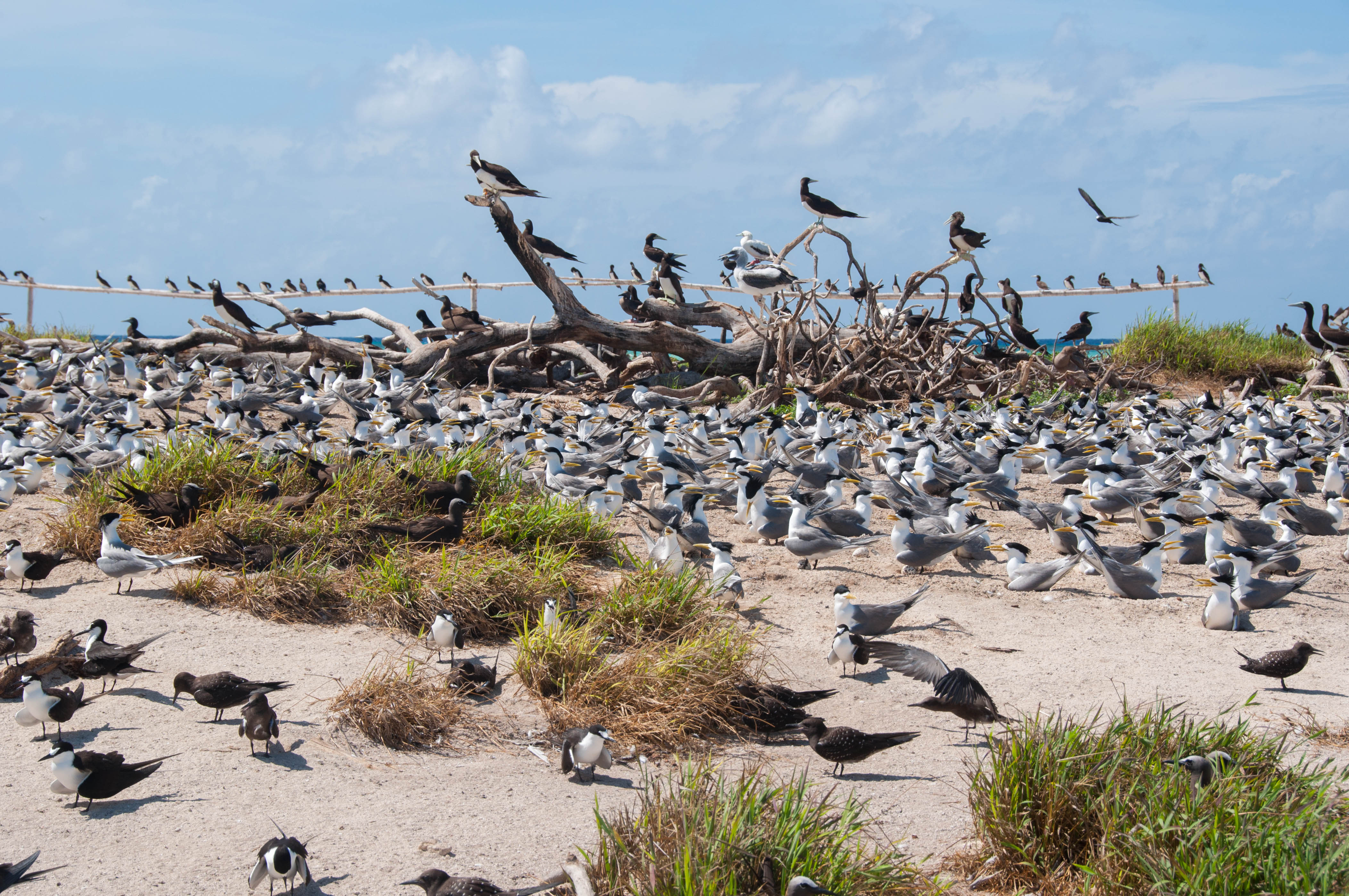 For those old enough (actually, not including me) to have seen the movie ‘The Birds’ by Alfred Hitchcock (1963), you might get an idea of how these bird islets look like, minus the attacks and the agony. The small South Islet only has 2860 m2 in surface area (Jensen 2013), but still manages to harbor around 5000 birds. Have you ever seen five thousand birds together? I had not (though the Navotas during AWC comes close) and it is difficult to describe. Let alone count them! Yet this is what we came to do. Early on, we had divided up in teams with specific assignments; those without assignment were not allowed on the island and had to stay on the boat. Teams of two for counting adult and subadult Brown Boobies (BB, Sula leucogaster) and a team for the Red-footed Boobies (RFB, Sula sula), another team for the juvenile, immature and pulli of each. Yet another for Brown Noddies (Anous stolidus), adults and nests, and Black Noddies (Anous minutus). And the Sooty Terns (Onychoprion fuscastus) and Greater Crested Terns (Thalasseus bergii). We also kept an eye open for a tiny black dot on a larger crested tern with a slightly different color bill, because who knows there might be a Chinese Crested Tern (Thalasseus bernsteini) here one day. Incidentally, when we had time in between, we noted the Pacific Reef Egrets (Egretta sacra) and checked if we could find where the Eurasian Tree Sparrows (Passer montanus) were breeding. “Oh and Willem, take a photo of the Barred Rail if it flashes from one hiding place to another pluck of grass please, because we lack the photo documentation on that one…” 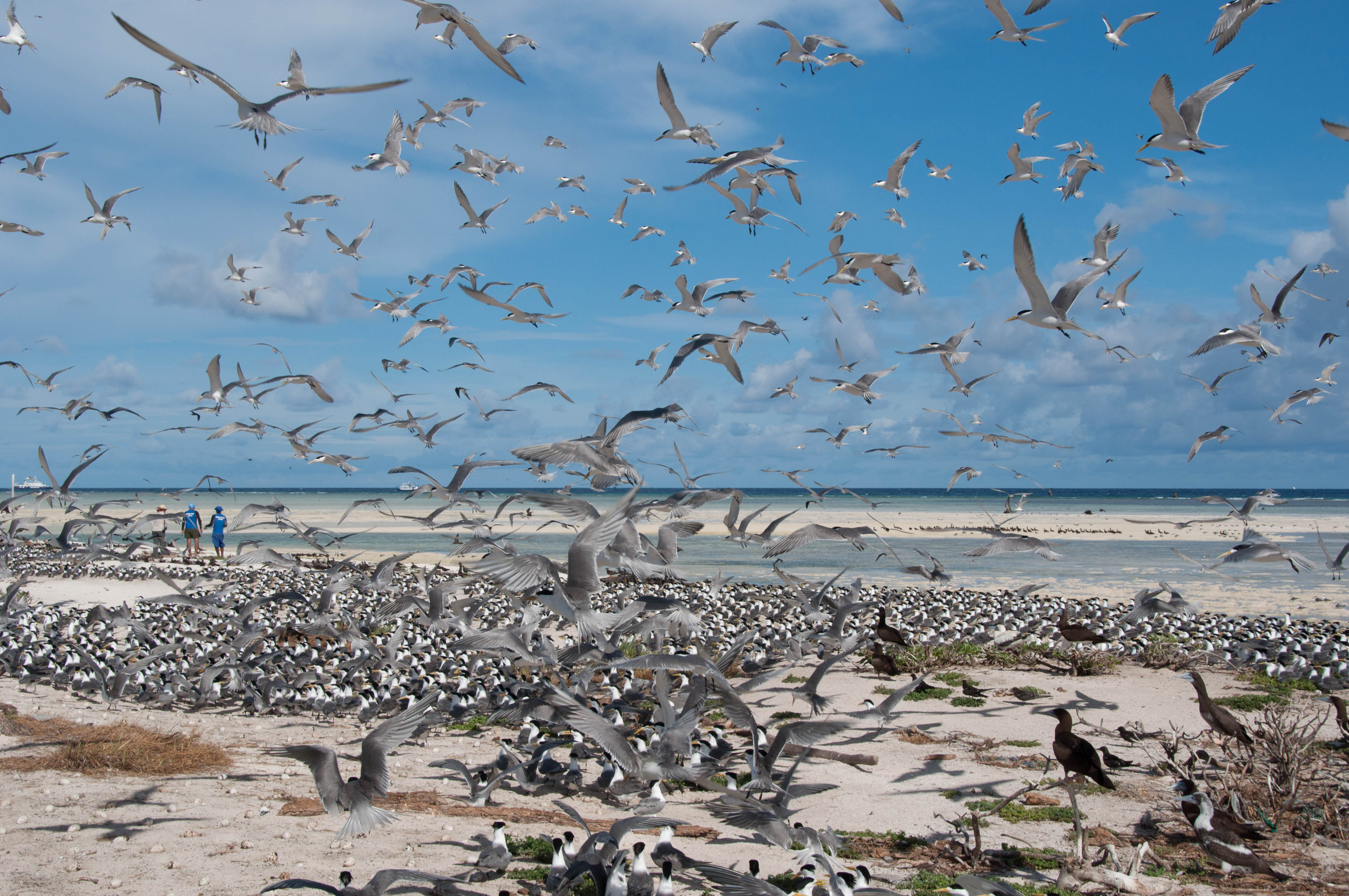 As we had only a few hours’ time between the tides, we had to move in and out again while the tide is high enough to approach the islet by boat, there were several teams moving around at the same time. Although the birds are used to some degree of disturbance from the park rangers doing maintenance on the islets, they still tend to fly up when you get too close. And staying your distance is simply impossible. This makes counting significantly harder. Luckily, me being the rookie sea-bird-pandemonium-counter, I was assigned the Red-footed Boobies, which are easiest to distinguish and tend to stay around longest before flying off. In fact, several times I thought a juvenile RFB was certainly dead, hanging over a branch with its neck slack and mouth gaping open, until it would wake up from its stupor and sat upright again. It gets incredibly hot on the small islets, and there is very little in the way of shade.

Actually the birds themselves create the circumstances for their own problems, resulting in population fluctuations. The RFBs will nest anywhere as long as it is off the ground, even a foot off the ground will do, but they need/prefer some sort of vegetation for nesting material. The consequent overpopulation of RFBs in the few remaining trees, coupled with plucking anything green from said trees for nest building, results in dead trees. And this can be clearly seen: the few trees have been reduced and are dying since the population of RFBs started breeding on South Islet a few years ago. In a few more years perhaps, there will not be enough space and greenery to sustain them, and they will seek another place to roost. By then, the open areas and sandy floor will have expanded, which is what the Brown Noddies prefer, increasing their nesting space. At least, until the vegetation recovers and the process repeats itself. 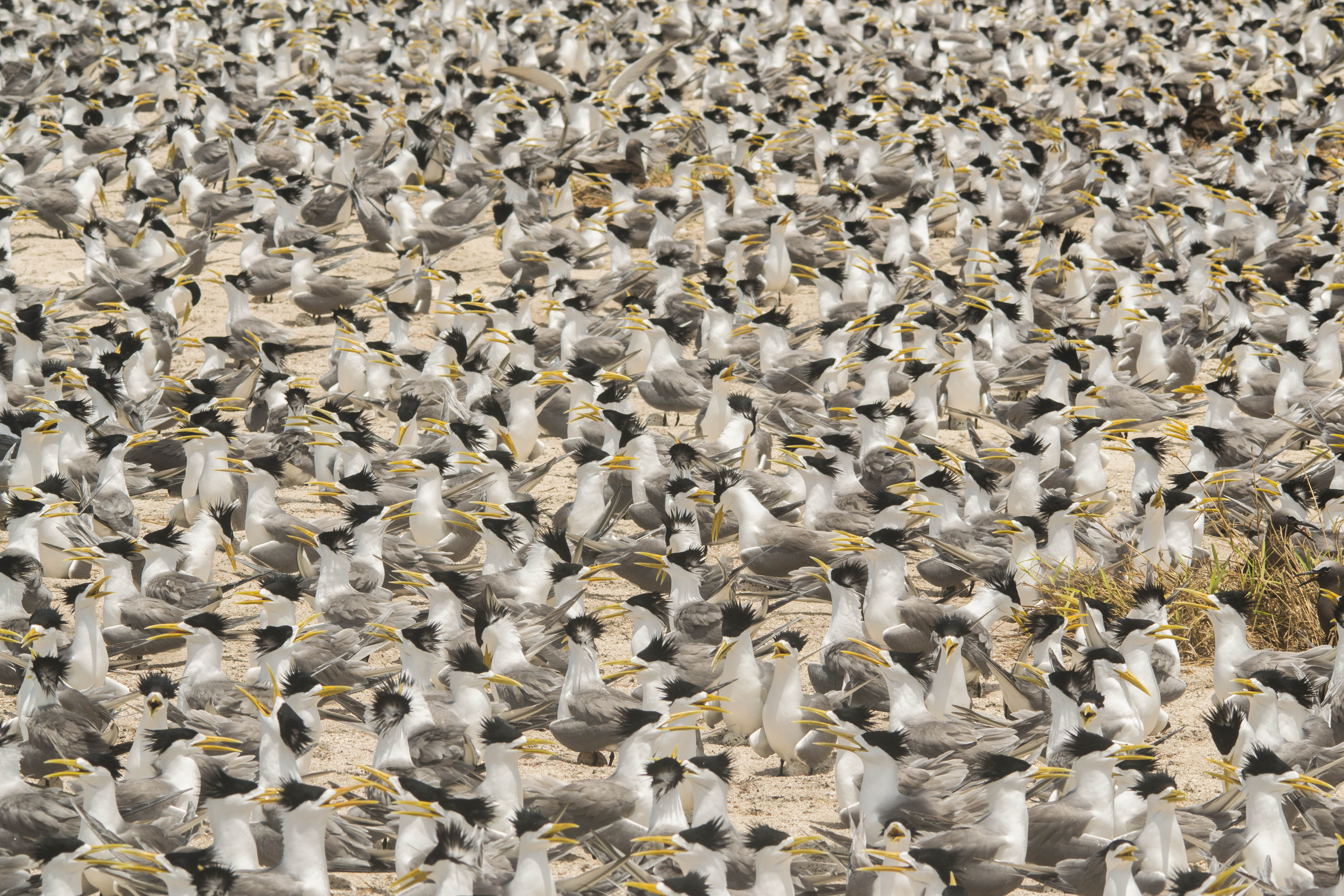 Similar events happen at the Bird Islet, only on a larger scale. The 1.5 hectare islet sustains over 25,000 birds of the 6 breeding seabird species, which isn’t possible to count in just a two-hour window. So we had to stay overnight on the islet and count from high tide to sundown, and again from sun up to high tide. After counting all the birds on the island during the day, in the evening we counted the birds flying in to roost, who had been out fishing.

Different counting techniques are used for different species, for the Sooty Tern for example. This year most of the Sooty Terns had already hatched and they have a wonderful way of raising their kids. They keep them all in crèches, with around 25-30 downy black speckled little terns on a small patch of beach, surrounded by 5 or 6 adults keeping guard on the perimeter. The other adults are out at sea most of the day, to find food. So you count the number of pulli and calculate the total adult population from that result. The Greater Crested Terns were still all sitting on their eggs, which are neatly laid out on the beach about a foot apart from each other, in a rough sort of grid. I was very happy not to have to count those, though I might enjoy the challenge a next time. When you get too close to the birds, the adults fly up, while the eggs remain (duh) neatly arranged in a grid on the floor. You walk between, very very carefully, counting the eggs with a stick as to not lose count of where you were, and draw lines around sections already counted. I estimate that those lines last for around 7 minutes after the birds return and start squatting and scampering around again; no stopping for a break, or you can start all over again. 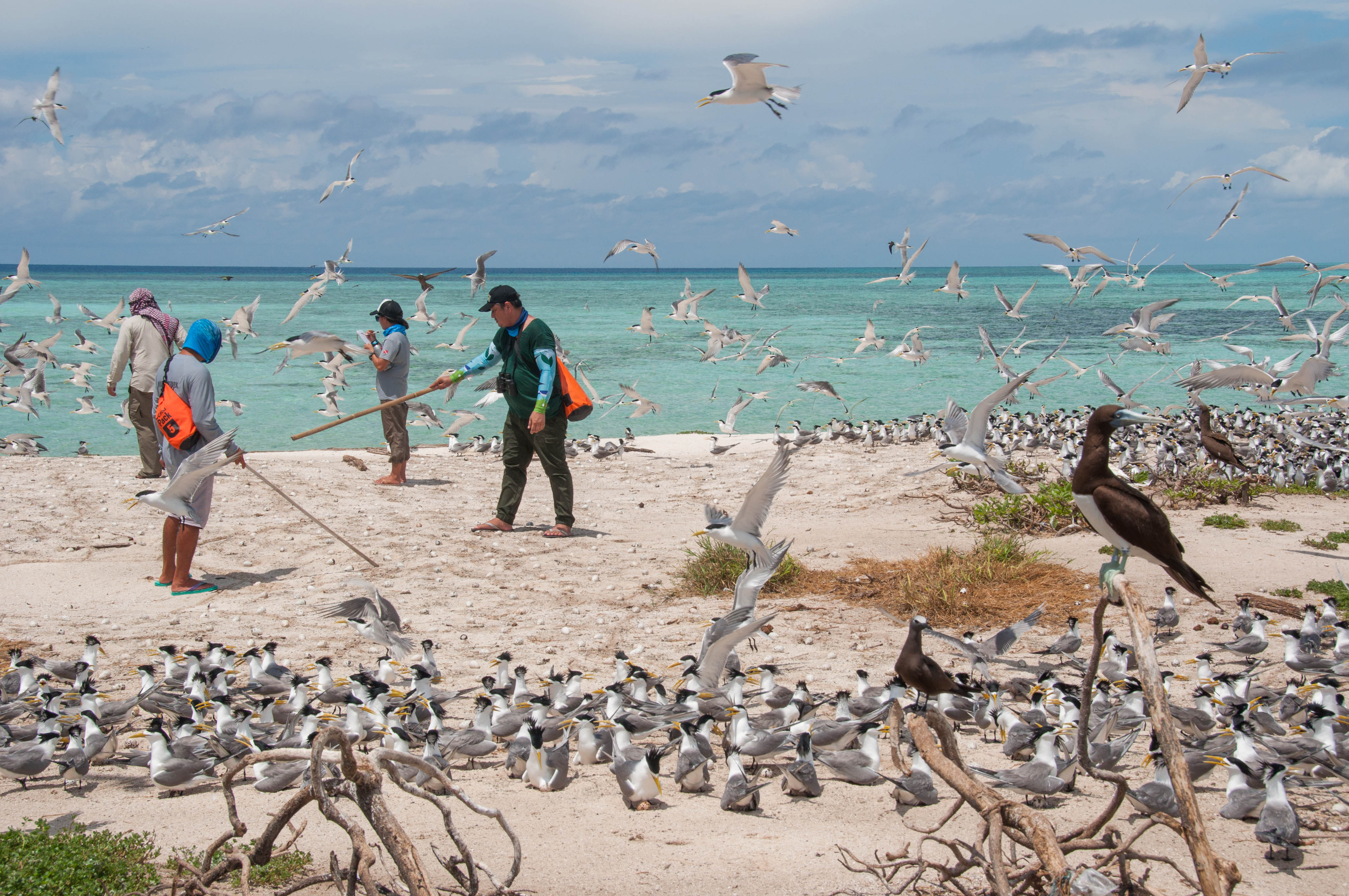 The subspecies of the Black Noddy that lives here (Anous minutus worcesteri) is actually endemic to the Philippines, in the sense that it is extremely range restricted, breeding only here in Tubbataha, and otherwise thought only to visit Malaysia and Indonesia in the non-breeding season. Let’s all think about this for a moment, because this means that this national treasure occurs only on several small islets, thus having an extremely small area of occupancy. Furthermore, these small islets are actually shrinking! When Worcester (1911) visited the reefs at the turn of the 20th century, over a 100 years ago, the islets were significantly larger compared to their current size. Kennedy in 1982 already noted this and recorded the island size at that time, and the islets are smaller still nowadays. Sea currents, typhoons and other natural phenomena are always dangerous for small islands. If nothing can be done to stop or reverse this process, ultimately we may lose the seabirds of Tubbataha. 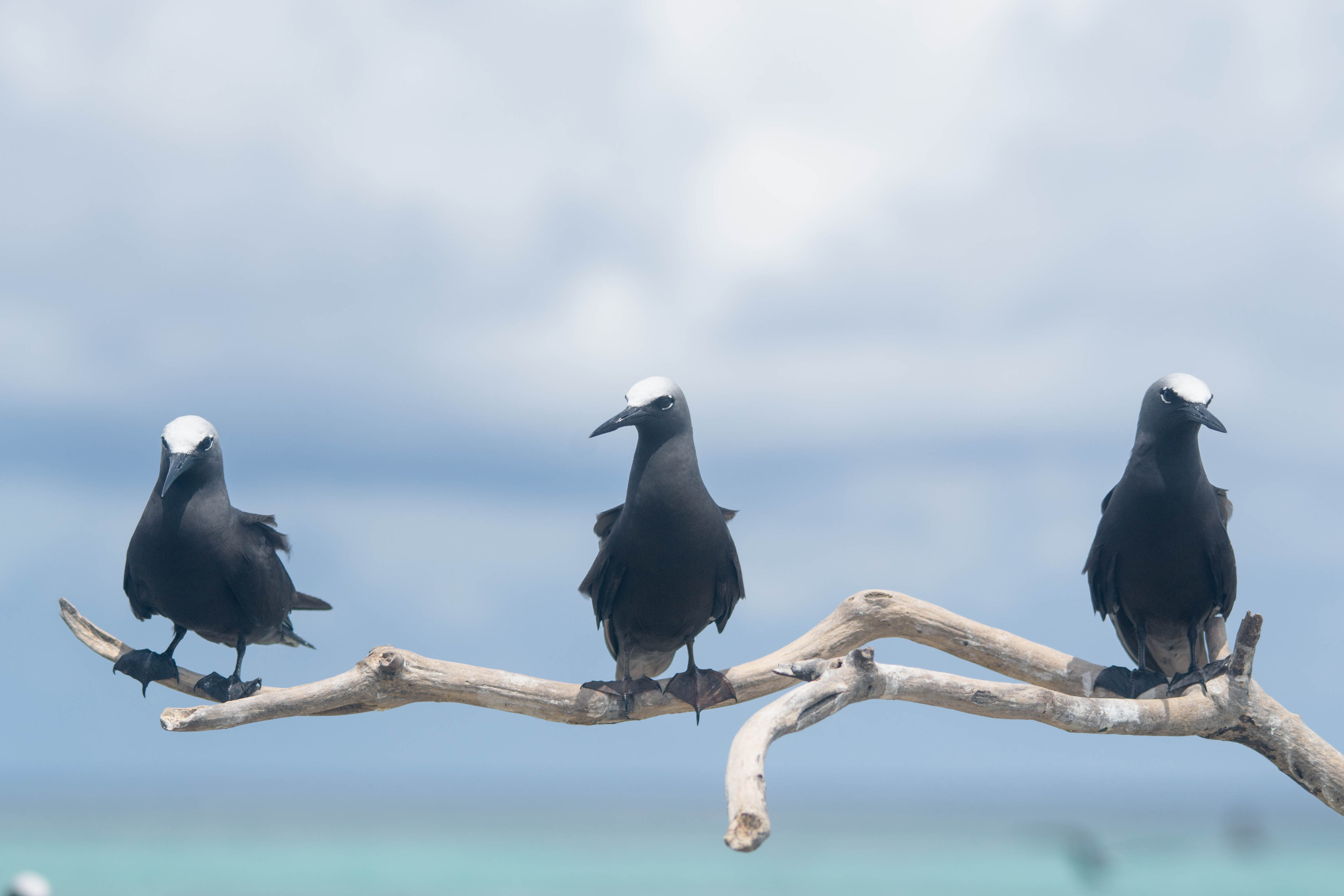 In total there have been 110 species of birds recorded in the Tubbataha Reefs Natural Park, of which the vast majority are just passing through (Jensen & Songco, 2016). Only 9 species breed regularly on the islets. Besides the 6 species mentioned above, these are Pacific Reef Egrets and Eurasian Tree Sparrows (although their nests have never been found since they were first seen in 1991, they are still very likely to be breeding here, or those eight individual birds are original colonizers and should have been well and grey from old age by now J). And finally there are two crazy Barred Rails running around the island sometimes (though I did not see them). However for the Boobies, the Noddies, and the other resident Terns, there are extremely few places left in the Philippines where they breed. It is of utmost importance that these small patches of habitat are protected well, and for informed management decisions, scientific research is needed. I applaud the people from the Tubbataha Management Office, the composite Park Ranger teams, and the volunteers going out in the heats and waves to count and manage our birds! And I thank them very much for being part of this year’s team. 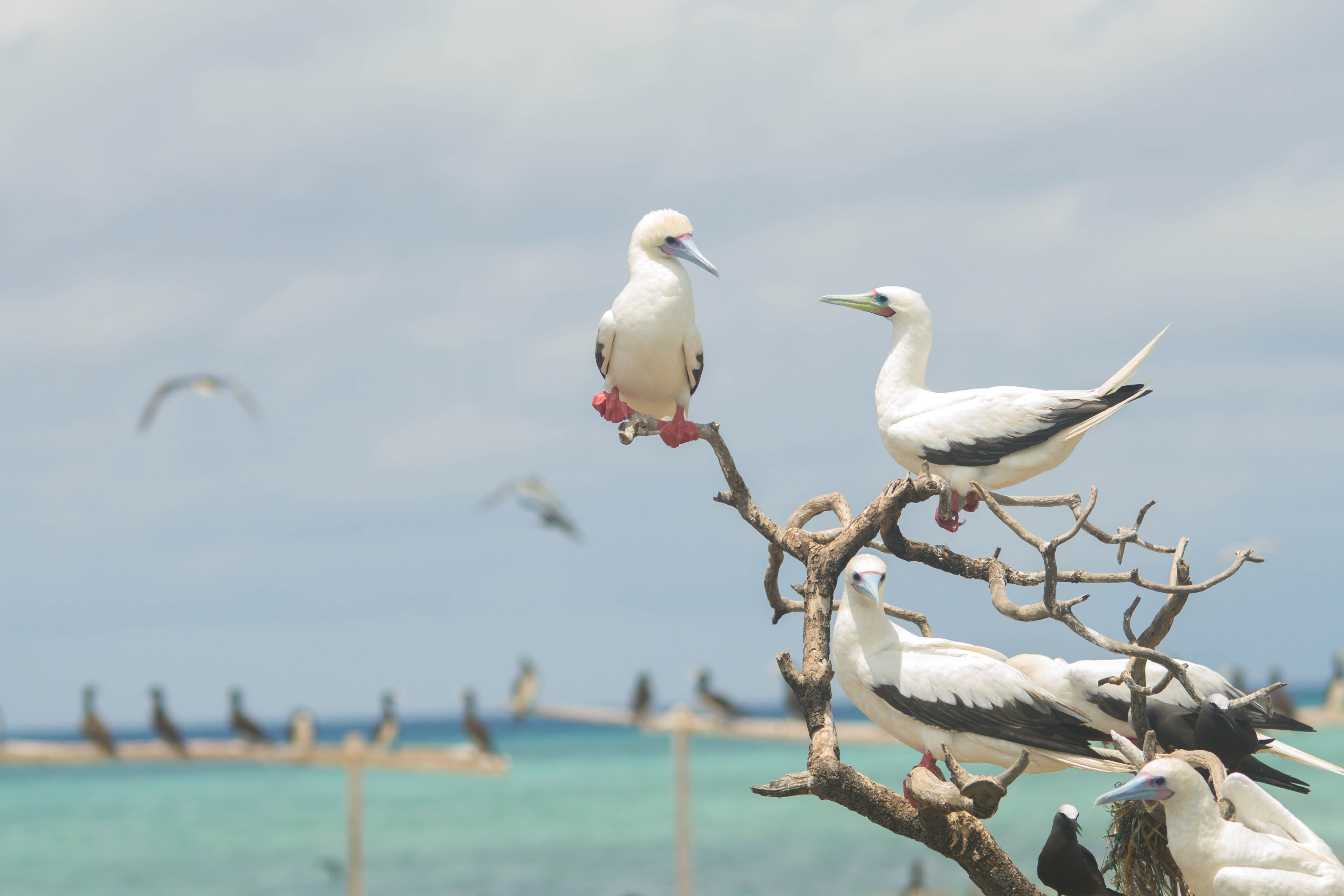 For those interested to learn more. Arne and the Protected Area Superintendent Angelique Songco have written a complete overview of the birds of Tubbataha in a science paper recently published in Forktail: The birds of Tubbataha Reefs Natural Park and World Heritage Site, Palawan province, Philippines, including accounts of breeding seabird population trends. 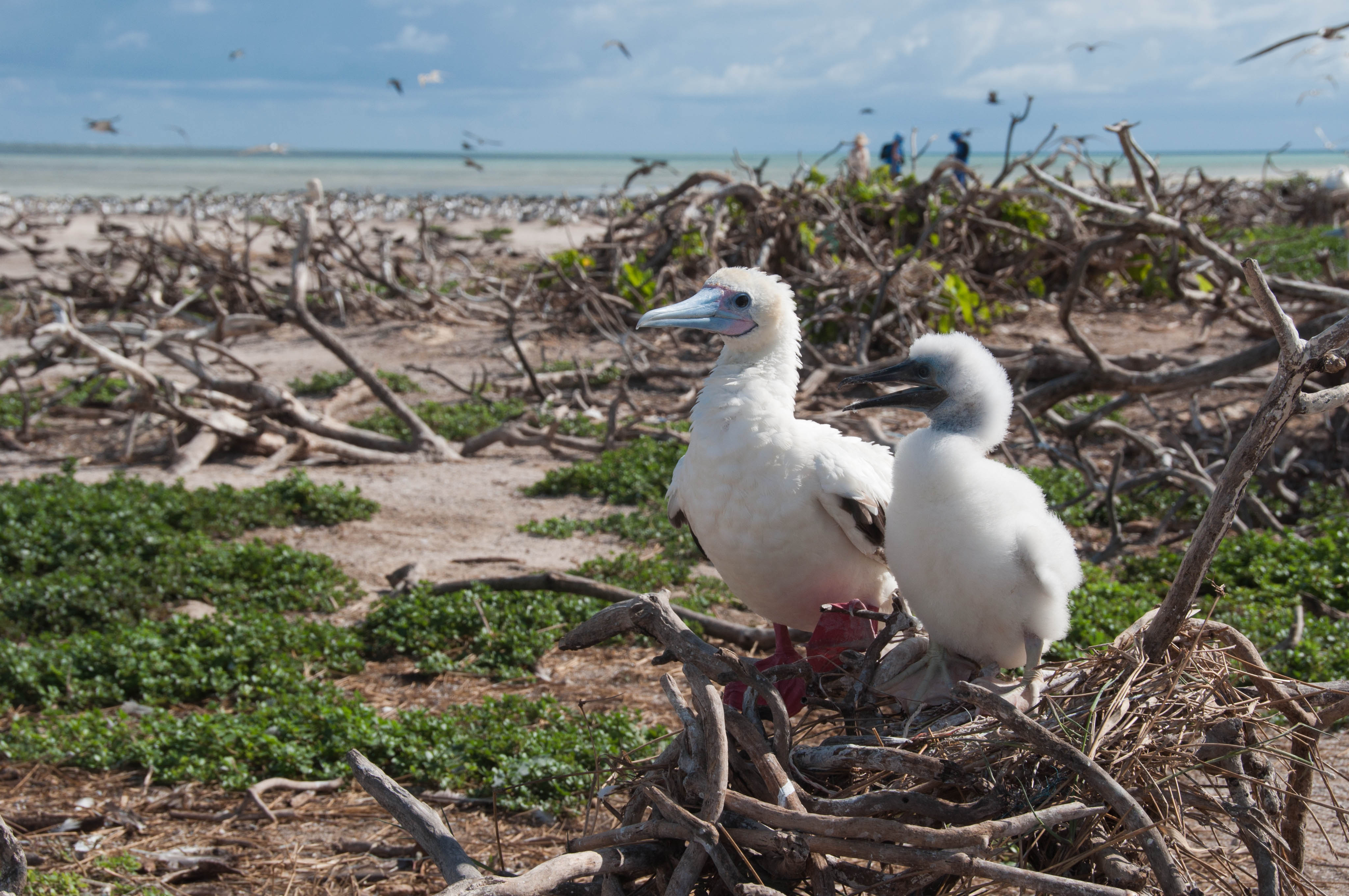